47th Annual Baja 1000 Off Road Race Dirt Bike Promo Spawns Endurance Race Way back in 1962, in efforts to promote their new 250cc motorcycle, the CL72 Scrambler, American Honda sponsored a non-stop endurance run from border city of Tijuana, down through Mexico's Baja Peninsula, to La Paz, on the Sea of Cortez. The co-owners... Read More » 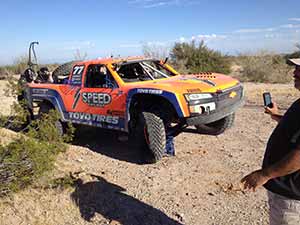 Racer Robby Gordon (of NASCAR, INDY CAR, and BAJA fame). We changed his blown tire. He finished 6th or 7th overall. I got the opportunity to talk to Alan Kohl this past week about the Baja 1000, which was run just over a month ago. This year’s 2013 Tecate Score Baja 1000 was Alan’s 30th... Read More »

Jess Maier and Torsten Palm traveled south to Mexico to race in the 43rd annual Baja 1000 on a Honda motorcycle, securing 3rd place in the Sportsmans class... Read More »

Mexpro.com providesMexican car, motorcycle and RV insurance to the Craig Anstine Baja race team and for anyone traveling in Mexico... Read More »

Engine size and suspension ultimately determine how fast a vehicle can go under the off-road conditions, so those are the key factors in determining a class... Read More »

The competitors of the Baja 1000 off-road race are given an allotted amount of time to complete the race. The time allowed depends on the length of the course... Read More »

The race is about 1000 miles in length and takes place on public and private land, running through mountains and desert, primarily on dirt roads... Read More »

The Baja 1000..."is a truly brutal race that takes place in the most difficult environment...The terrain is extremely rough...".. Read More »