Continuing with my interview with Alan Kohl of MotorMexico.com…

Alan, tell me more about the Baja 1000 off-road race…what’s involved in being a racer or driver there? How long is it? Where, exactly, does it take place? What type of terrain?

“The Baja 1000 has been taking place in Baja for 42 years, every year in mid-November. The race is sponsored by the Mexico Department of Tourism, the Mexican states of Baja California and Baja California Sur (South), and Score International.

For three out of four years the Baja 1000 takes place in northern Baja California. It generally follows much of the Baja 500 course which begins in Ensenada, makes a loop around northwest Baja California, goes south to San Quintín, west to the Juárez Mountains, north to Ojos Negros and across highway 3, west and back to Ensenada. Every 4th year, though, the race runs from Ensenada, Baja California to La Paz or Los Cabos, Baja California Sur.

The race is about 1000 miles in length and takes place on public and private land, running through mountains and desert, primarily on dirt roads. In 2000 the course was approximately 2000 miles long! What an epic!

The Baja race participants run day and night until they finish the race or, crash or suffer a mechanical breakdown that makes it impossible for them to continue.

Because of the huge geographic areas involved in this 1000-mile off-road race, as well as the difficulty of the terrain covered, logistics and race management of the various components of the race team is complex.

One of the primary phases of the race involves the racer pre-running the racecourse in a suitable, non-race vehicle, to familiarize the driver with the route. Other pre-race phases for each team include: race logistics planning, vehicle preparation and technical inspection.

The design and construction of the race cars is an engineering feat and art form. Race vehicles must conform to strict safety standards and are subject to a thorough safety inspection before each race. 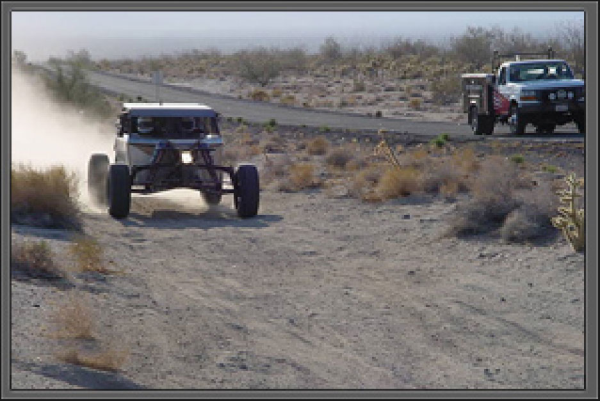 In addition, every vehicle must be equipped with a satellite tracking system so race organizers can find each racer. In the old days it was not uncommon for a racer to get lost and run out of gas. There were cases where a racer was stranded for a week or more until they were located.

The satellite tracking system is also used to calculate speed on sections of the course that are on public highways. If a racer exceeds the speed limit, he is penalized time, i.e., time is added to the actual elapsed time needed to complete the race.

On race day, some teams have a vehicle following the race on the nearest highway to monitor the race vehicle’s location and to be able to respond quickly if the race vehicle suffers a mechanical problem or crashes. These vehicles are called “chase” vehicles. The support vehicles and race cars maintain contact via VHF radio. Teams with lots of financial resources also have a helicopter follow the race vehicle during day light hours."

Thanks Alan! Next time…we will hear about the multitude of vehicle types that participate in the Baja 1000 and the different race classes. There’s not just one!