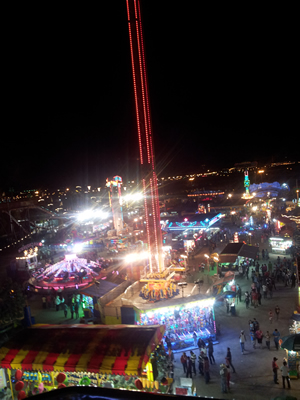 As an American having only lived for less than a year in Saltillo, Coahuila, I often find pleasant cultural surprises in my new home town. Though the border to Texas is only about three hours away, the cultures of the U.S. and Mexico are worlds apart. It certainly staggers in comparison to the cultural variances between the United States' other neighbor Canada.

The state and county fairs I grew up with are known internationally as agriculture shows, or a sort of trade show for all things pertaining to farms and farmers. For the rest of us it's a place to ride roller coasters, play games for stuffed animals, watch live music, and scarf down elephant ears and cotton candy. I didn't see any elephant ears at Saltillo's feria but nothing else was missing: and at 35 pesos (well under three U.S. dollars) for admission I couldn't complain.

As an expatriate I moved here to immerse myself in a different culture, but I often find myself looking for scenery that reminds me of my home country. Mexico's summer ferias are perfect mix of the North American county fair theme and a uniquely Mexican culture center with hints of other Latin American influence.

The arts and craft vendors, as well as the stop-and-go eateries, come from far and wide. Merchants from all over Mexico, the Caribbean, Central America and other parts set up to sell their goods to fair goers. I ate Korean sweet bread across the walkway from a Cuban garb vendor. Indigenous Mexicans also set up shop wearing their traditional clothing and selling jewelry and other crafts.

While there was a plethora of international aspects to this annual two-week festival, there was plenty of Mexican culture to go around. And that's really what I'm here for after all. Admission to the fair also includes a chance to see live music and other performers, that normally you could expect to pay 200 pesos to see at a regular tour show.

At the main stage I heard many Mexican bands that I hear every day on the radio. Groups such as Banda Jerez, Los Titanes de Durango, and Sonora Dinamita play popular genres: Banda music originates from central Mexico and is identifiable by the implementation of brass instruments. It is the more popular style of music in the northern Saltillo region of Mexico. Norteña is easy to spot because it usually has an accordion playing. Cumbia music originates from Columbia and Panama, and has an identifiable Caribbean/Latin rhythm that's accented with maracas for percussion. Whether streaming from the performers on stage or blaring from the speakers at a carnival game, there's plenty of music to go around at the feria. 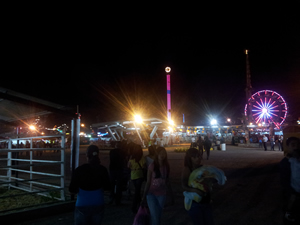 Speaking of the carnival games, this was something that deviated very little from my North American experience. Not a week before first visiting the feria I was at the Circus Circus casino in Las Vegas on vacation. I saw the same games and prizes here in Saltillo, but for a fraction of the price. And there were no token or ticket bureaucracies involved. A game that would cost two dollars in tokens to play in the U.S. was only 10 pesos, or about 80 cents. I was happy to see most things were about one third the price I pay north of the border.

The rides are what always draw me the fair, and it's what drew me the feria as well. They were the same roller-coasters as the ones we have the U.S., even with the signs and marquees still in English. I could have wished to pay less for these. The kiddie rides were 20 pesos each, the upsy-daisy, not-for-the-weak-stomach, rides with the long wait time cost 40 pesos per person, and a romantic Ferris wheel go charged 30 pesos per lover.

The Feria of Saltillo is definitely worth your time and money if you're in the area. I plan to stop by a couple more times this summer for the live music alone. It usually runs from mid-July through early August 5th here in Saltillo, and takes place at the Teatro del Pueblo. And, what makes it better, the admission proceeds go to a long list of non-profit groups.

Saltillo is a city of only 650k people. Like the U.S. the more people in the area, the bigger and better the fair. Ferias take place all over Mexico from June to September. Inquire locally to find a feria near you.