Hey Gringos: Come to Mexico and Live the Revolution 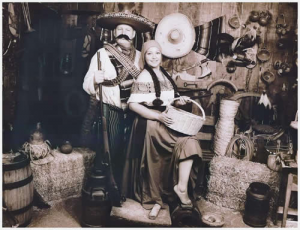 After two years of life in Mexico as an expat I've noticed some very big differences from my own North American culture. That's the Mexican people's willingness to take to the streets and use force if necessary when they're discontent with their government's policies.

November is the month of the revolution in Mexico. The revolution officially started November 20th in 1910, and for good reason. From 1876-1910 Mexico was essentially ruled by a dictator, General Porforio Diaz. During the years of the Diaz regime, Mexico saw unprecedented economic reform and expansion, modernization and great leaps in infrastructure, and the political system realized new levels of stability as well.

During the 1800s Mexico was very unstable. Her people had been through war with the US over Texas and other areas such as modern-day California, Arizona, Utah, Colorado and Nevada to name a few. The might of the US military was stronger and manifest destiny eventually formed the border that we know today.

Mexico had gone through her own civil war after the Mexican-American war. And during the 1860s the French invaded, as Napoleon III was trying to expand his Empire in the Americas. I guess it made sense for a strong Mexican leader to step forward to make the hard decisions needed to make Mexico what it is today: the largest Spanish speaking country in the world, with the world's 13th greatest economy.

However, these expansions and modernizations came at great cost to the lower class of Mexico, which still remains a large majority today. In 1910 the working classes began to show signs of social unrest, and General Diaz promised that he would step down after 34 years of control, and withdraw from the presidential race.

A politician named Francisco Madero began touring the country, gaining support for a new political system in Mexico, and gained popularity among the working people. Shortly after, General Diaz put in a new bid for presidency and had Madero arrested for sedition.

Francisco Madero escaped from prison and made his way to San Antonio, Texas. On November 20th of 1910, from Texas, he called upon the Mexican people to take up arms against the oppressive Diaz regime, and thus began a decade-long conflict, which first started in the north and eventually made its way to Mexico City. 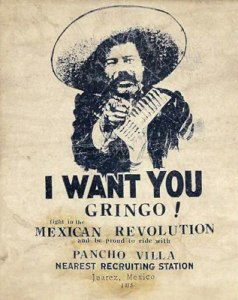 Pancho Villa was the real people's hero of the revolution and the most famous of them today. During the years of the revolution, he was a great horseman and the people called him "The Centaur of the North." He was named commander of the northern division. His popularity was such that recruitment posters written in English can still be seen around today, calling on North Americans to join in the cause.

Villa was very socialist, a Robin Hood of El Norte. He was wanted in many areas of the American Southwest for stealing weapons shipments from the US military. It was those Yankee weapons that helped the revolution gain victory.

Much of his work had to do with seizing farms from wealthy land barons, then distributing farmland to the poorer farm workers. This was a very bloody time in Mexico's history and it was especially dangerous for landowners.

The grandfather of the former governor of Massachusetts, Mitt Romney, fled from an Anglo-American colony where fundamentalist Mormons had lived (and many still do) to practice their religious beliefs after Utah joined the Union, and the practice of polygamy was outlawed in Utah territory. I know this stuff because my bloodline is from the settlers of Utah territory.

Today there are still Anglo-American religious colonies including fundamentalist Mormons as well as Mennonites in Chihuahua and other parts of northern Mexico. Anglo farmers from Mennonite settlements come to Saltillo to sell cheese and other artesian foods: and though they look just as Anglo as I do, they speak Spanish with a native Mexican accent.

But you don't have to be the member of an extreme religion to enjoy the benefits of post-revolution Mexico. While some parts of this country are still dangerous, I can tell you I will always prefer aspects of Mexico's laid-back government. And it's like Benjamin Franklin said "Those Who Sacrifice Liberty for Security Deserve Neither."