Going to The Dentist’s Office in Mexico

Many people have phobias of going to see the dentist. It was never a great bother to me when I was younger. While growing up Washington State I was covered by the state dental for children. After I left home for the military my teeth were cared for by Uncle Sam. Seeing the dentist always just seemed like one of those chores I had to do. And they never seemed to be very nice. To set the score straight, I have never been a stickler for dental hygiene. I’m an avid black coffee drinker, I smoked for almost eight years, I’ve never flossed as much as I should, I’ve stayed up late plenty of nights without brushing before going to bed, and I haven’t done regular cleanings since I was under age.

When I left military service as a 23-year-old I was a college student without any dental coverage. I soon gained a dental phobia of my own, but it doesn’t have so much to do with the Novocain needles going into my mouth, or the squelch of the cavity drill. It has more to do with the cavity bill! I needed my first root canal when I was 26; the pain was so great I caved into paying more than six hundred dollars, and with a generous student/veteran discount. Surveys show that on average, a molar root canal in the US will cost around one thousand dollars. 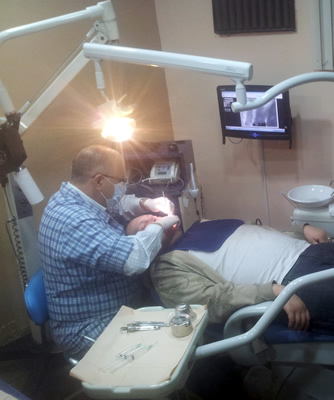 If I would have taken my tooth problem down to Tijuana, I would have ended up paying about $225 for the procedure: less than a quarter of the US price. The statistics say this, and as an expat from the US living in Mexico, I can attest to it personally. I had a root canal about six months ago here in Saltillo, and it cost me around 2,500 pesos, which sticks up to the aforementioned statistical price range.

The first root canal that I had done three years ago in the US didn’t exactly go by the book. While the doctor was filing out the necrotic nerve tissue, the filing instrument fractured. It broke off deep in the root of my bottom left molar. It’s not a mistake of incompetence; it’s simply something that happens every once in a while, as I’ve been told by several dentists.

The good doctor searched but could not remove it. He told me, and had me sign a form, saying that down the road I may end up having to get the tooth extracted, or I would need to have a very expensive endodontic surgery. It’s three years later now and something must have stirred while I was flossing after a eating barbecue beef. The corroded piece of the file gave me an abscess that enflamed quickly and began to keep me from sleeping or performing simple tasks without feeling a nine out of ten on the pain scale.

I’m glad I’m not seeing the same dentist I was three years ago, because the sort procedure I need to correct this endodontic snafu (called an apicoectomy, during which part of the root tip is removed) would cost more than $1,000 USD back home. Here it will cost about a quarter the price.

I’m lucky enough to have some extended family that speak English and practice dentistry here. Border towns have very competitive rates as well. I would want some personal references from a doctor here first. I got two opinions on this particular root. One doctor told me he would have to pull it.

My cousin recommended me to her former mentor from a local University. I went to him. He took a few X-rays, gave me three shots of local anesthesia and drained the abscess. For the short-term treatment and a very long-breathed, thorough and comforting consultation I was charged about $40 US. This doctor is more skilled, and charges a bit more than the other doctor offers for his treatments.

Some general things I noticed about dentists here is they generally will spend more time talking to patients. Most dentists in Mexico were publicly educated and didn’t have to incur the six-figure loans that many American dental students incur. I remember in the US with a military dentist the doctor saw my gums were inflamed from smoking cigarettes, and poked and prodded at my gums as if to punish me. I’ve never been treated remotely by a Mexican doctor. Mexicans seem to be much more sincere and genuinely kind-hearted in their culture.

Another thing I noticed was a lack of narcotic pain-killers for quelling dental agony. When I had wisdom teeth removed and my root canal abscess in the US, doctors quickly wrote scripts and friends with their own personal stash were happy to give me the quick relief of an opiate pill. Here when I bring up Vicodin or Percocet at pharmacies no one has ever heard of it. The only prescriptions dentists send me home with here are for ibuprofen, antibiotics and they tell me to apply cold to the swollen area. I don’t know what it’s like in other parts of Mexico, but here in Saltillo prescription drugs, which could be abused for recreation, are very, very rare.

Anyhow, dental procedures are a great excuse to make a Mexico getaway. Remember always, fellow travelers, to buy your insurance before crossing.