Recently there has been a major change in the way that Mexico processes the Forma Migratoria Multiple (FMM), popularly known as an entry permit or a tourist “visa” (although it’s not actually a visa). 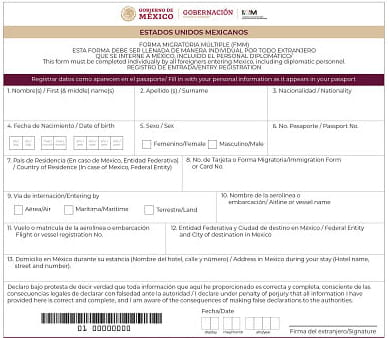 While previously an FMM was issued for 180 days, The National Institute of Immigration (INM or Instituto Nacional de Migración, Mexico’s government immigration organization) is now trying to issue them ONLY for the length of the visitor’s stay. INM agents are now asking for verification of the length of your stay, such as a reservation confirmation or return ticket. Then they give you the number of days needed on your FMM, and no more. 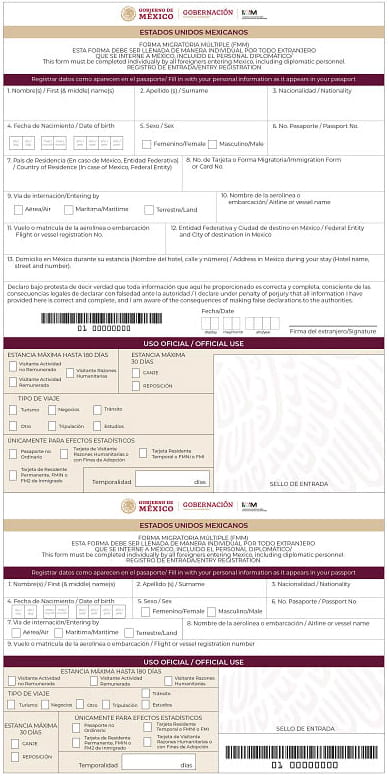 Additionally, although you used to be able to go to INM and get your FMM extended if you decided to stay longer, up to a total of 180 days, you can no longer do this and must plan on leaving prior to or on the day your FMM expires.

The main factor driving this change appears to be an effort on Mexico’s part to cut down on the number of people living there “irregularly” (a term Mexico uses instead of illegal), i.e., people living in Mexico on a series of repeat FMMs.

Mexico is currently running a campaign to help people that have been living in Mexico irregularly get their temporary residency cards. For more information on this campaign see Mexico’s Registro Nacional de Extranjeros Campaign (National Registry of Foreigners Campaign), below.

If you are coming to Mexico for a vacation, typically a week or two long, you should have no problems and likely may not even notice the change. The most important thing you need to know is to be prepared to show the immigration official proof of your plans, such as hotel reservation confirmations or a return ticket home.

Be sure to watch how many days the agent gives you on your FMM, to ensure you are allowed enough time for your trip. Once you leave the desk, you will not be able to make any changes.

In the summer of 2022, Mexico’s INM began implementing changes to the FMM system, rolling out a new process of issuing electronic FMMs instead of the paper cards. When visitors arrive at the following airports, their passports are scanned and then stamped by the immigration agent. This is done instead of handing out FMM forms or cards.</p>

The following airports are currently (as of October 2022) using this system:

This may eventually be expanded to include all international airports. As changes are implemented, there could be changes to the procedures. Just follow the immigration agents’ instructions.

If you are coming to Mexico for a longer stay, but still planning on staying less than the allowed 180 days, you may need to do a little more preparation. It would be best if you have reservations for the duration of your stay, but it’s possible you may not because you’re planning on just going where the wind takes you.

In that case, a plane ticket for onward travel or a return ticket will be the most effective way to get more time on your FMM, as you’ll be able to show the immigration agent exactly when you’ll be exiting Mexico. If you are crossing into Mexico by land, with no set itinerary, be prepared to explain your plans and make your case for the longer amount of time.

An additional tip: our personal experience is that if you dress nicely you have a better chance of getting an extended FMM.

Many people own homes in Mexico which they live in part-time during the inclement weather months in their home country, usually winter.

If this applies to you, Mexico would like you to get residency, either temporary (up to 4 years) or permanent. Thus, you may not get the full 180 days on your FMM that you are used to, and instead receive substantially less time.

You can make your case for admission at this time for the full 180 days and promise that you’ll be looking into getting residency when you get back home. Whether this works or not depends upon the agent you get. Alternatively, you can investigate whether you qualify for the National Registry of Foreigners campaign (Registro Nacional de Extranjeros), currently underway.

More and more people are working remotely for companies, enabling them to live anywhere they choose. Many are choosing Mexico. Partly because of the pandemic and partly as an offshoot of our interconnected world, companies are realizing that remote employees are just as productive as on-site employees.

These “digital nomads” oftentimes want to stay in Mexico longer than the allowed 180 days/trip. This is one group that immigration is targeting with shorter stays, unless they can provide proof of their plans to only be in Mexico for a finite amount of time. It is also this group that Mexico is targeting with their National Registry of Foreigners campaign (Registro Nacional de Extranjeros), which provides an easy way to get Temporary Residency in Mexico.

A perpetual “tourist” is someone that has been getting back-to-back FMMs for years, essentially living in Mexico on the FMM. This is one of the practices that Mexico is trying to stop.

Mexico has been tracking people’s comings and goings from Mexico since 2010. They know how many FMMs a person has had and how frequently they get one. If you are one of these people, you may want to take some precautions on your next border run. Precautions such as ensuring there is someone you trust to look after your pets and access your home in the event you are unable to return. You may get the full 180 days on your next FMM, or immigration may give you a week to collect your things and leave, or deny you entrance all together.

Fortunately, Mexico is currently running an update campaign for their National Registry of Foreigners (Registro Nacional de Extranjeros), which provides a Temporary Resident’s card without the need to leave Mexico or provide financial information. If you have taken multiple trips to Mexico, you may qualify for this campaign.

In its push to get more people “regularized” in the country (the term Mexico uses for living there legally), Mexico has begun an update campaign to its National Registry of Foreigners (RNE).

The RNE is basically a database of all persons who are in Mexico with residency cards. The people that are living in Mexico on repeat FMMs are not in the database. It is assumed that Mexico is running the “update campaign” in order to update their RNE database.

The update campaign allows people who are there irregularly to qualify for a Temporary Resident’s card with less red tape than normal.

To qualify, you must have:

No proof of financial solvency is required.

To see if you qualify, you must go to your local INM office and request temporary residency. Here is a list of the main INM offices in each of the 32 Mexican states. There are satellite offices located in most larger towns. If you need assistance, there is an INM Immigration Assistance Center phone number (call within Mexico) 800 004 6264. Being able to speak Spanish is helpful if you call.

The cost of obtaining residency through the Registro Nacional de Extranjeros update campaign is about $14,096 Pesos; roughly $700 USD (as of June 2022).

How Long Will This Last?

There has been no announcement by INM as to how long the change to FMM processing will last. The INM Facebook page indicates that the update campaign for the RNE will last through 2022.

At this time, the best advice if you’re visiting Mexico is to come prepared to show plans for the length of your stay.

If you think you may qualify for Temporary Residency under the National Registry of Foreigners Campaign, you should get to an INM office as soon as possible to take advantage of this opportunity.