Ten Things to Know When Driving in Mexico

Yes, it is generally safe. That said, you need to be aware of your surroundings. Just like anywhere else, there are places in México that it is best to avoid, especially at night or if you are alone. Most areas that tourists frequent are safe to visit (or live).

Driving in any country foreign to you can be a little nerve-racking, so if you are nervous, that is completely normal. Try to relax and remember that although it appears chaotic, there is an order to it. Drive defensively and keep your wits about you and you should be fine.

2. Drive During the Day

Try to plan to do most of your driving in México during daylight hours, especially cross-country driving. The highways are not well lit, making it hard to see road hazards like potholes, animals in the road, and pedestrians. Driving around town after dark is generally okay, but avoid unfamiliar/isolated areas for safety reasons.

Speed limits in México are posted in km/h (kilometers per hour). Get familiar with your speedometer so that you see where the km/h numbers are. Speed limits are posted on a white sign with a red circle around the number. A speed limit sign that says 50 km/h means the speed limit is about 30 mph. Similarly, distances on signs and highways markers are in kilometers.

As you drive, stay alert and aware of your surroundings. Towns and villages are full of children playing, dogs and chickens running about, and vehicles going every which way. You will see bicycles, pedestrians, and livestock on the highways. Pay attention to keep yourself and everyone else safe.

If you do any amount of driving in México, you are bound to encounter a military or agriculture checkpoint.

The agriculture checkpoints are usually near state borders and their purpose it to prevent contamination of crops with invasive species. These are usually the quick, “do you have any fresh fruits or vegetables” questions and you barely even stop. The military checkpoints are different.

These are either permanent or temporary checkpoints. There is usually a canopy and military vehicles with young men in uniform standing on both sides of the road with their automatic rifles. While it is intimidating to see these soldiers with guns, there is nothing to be alarmed about. They are inspecting vehicles for illegal drugs, guns, or other contraband items. Their purpose is to make México safer.

Expect to be stopped and asked where you are coming from and where you are going. Do not expect them to speak English. You will likely be waved on but you may be asked to step out of your vehicle so they can search it. They may look in your glove box, under you seats, and in the trunk.

Be polite and understand they are doing their job. When they are done, you will be on your way again. In the event they detain you and your vehicle, you need to request access to your country’s consulate.

6. Do Not Drink and Drive

Of course you know this. México uses alcohol checkpoints to test for drunk drivers, especially around the holidays. Legally drunk in México is BAC of 0.04, half of what it is in the States. Taxis are not expensive, if you are out drinking, take a taxi home and save yourself the experience of a Mexican jail.

México has a vast system of highways, both federal and state. These are called carreteras. There are free highways (libres) and toll highways (cuotas). The cuotas are denoted by the letter D on their signs. Tolls vary in costs. If you need to calculate the amount you can anticipate paying in tolls, the Mexican government has a website to do so at Point to Point Routes. Except in northern Baja, payment is in pesos only.

Take the toll highways whenever possible because they are safer and in better condition. They are also patrolled by the Green Angels who provide roadside service should you break down enroute. 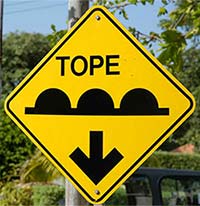 Topes (“toe-pays”) are found throughout México. They are called speed bumps in English. There is no standard tope, they can be anything from a thick rope across the road to a bump the size of a large curb. Sometimes there are warning signs before or next to the tope, but not always. There are frequently mechanic shops (taller mechanico) located near the topes, as they can damage your vehicle if you do not slow down. When you are entering a village, be especially vigilant, as they are used to slow down traffic. 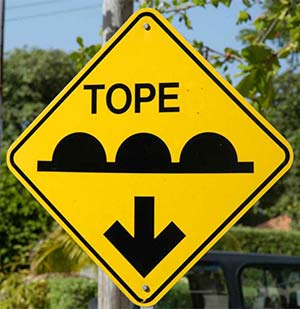 Turn signal use in México varies. Sometimes a driver will have his signal on and actually make the turn indicated. Other times, he won’t. Never assume just because a signal is on that that is what the driver is going to do. The left turn signal is especially challenging.

On the highway, if the vehicle in front of you puts on its left turn signal, it may mean that it is going to turn left. Or it may be that the driver is signally you it’s safe to pass. Or the driver may be about to pull over to the right to allow all the traffic to pass before making his turn. You never really know, so always use caution.

If the vehicle behind is signaling with a left turn signal, he is either turning left or wants to pass you. In case of the latter, pull over to the right as much as you safely can to help him to pass.

Gas stations in México look much the same as gas stations in the U.S. and Canada. The big difference is they are full service, i.e., the attendant pumps the gas for you and sometimes washes your windshield. You should give the attendant 10-20 pesos for this service.

Use these tips to help make your trip to Mexico safer and more enjoyable.