What Food Should I Eat in Mexico?

Going to Mexico? Are you a foodie? Just want to sample local fare? What food will give you the real taste of Mexico? We’re going to give you the answers--learn about the most popular and authentic foods of Mexico so you can get on with sampling the next time you get down there.

Mexico is a culturally diverse country, and the authentic food you discover can depend largely on where you are visiting. The foods we listed, however, can be found throughout the country, though may vary in spiciness and flavor by region. I bet you’re chomping at the bit!

Carnitas
Carnitas, or "little meat", are made from all parts of the pork. It is braised or roasted for long time in heavy spices and lard until it becomes very tender and juicy. When finished the pork falls apart into small pieces that are used to fill tacos, tostadas, enchiladas, tamales, burritos and so much more. They are delicious!

Flautas
Meaning "flute", flautas are rolled corn tortillas that are deep fried until they become hard resembling a flute, for which they are named. Before frying, they are usually filled with shredded meat, cheese or potatoes and topped with lettuce, cream or sour cream, guacamole.

Enchiladas
The origin of the Enchilada is said to date back to the ancient Mayans, who would wrap fish in tortillas before eating them. Today the dish is a little more elaborate. The tortilla is folded around any kind of meat, cheese, bean or vegetable, and then covered with a tomato chili sauce. Enchiladas covered with Mole sauces are called enmoladas.

Pazole dates back to pre-Hispanic Mexico, where it was a celebratory food served after of sacrificial rituals. Meaning "hominy" in Spanish, Pazole is stew made with pork (more traditional) or chicken, hominy and various herbs, spices. It is generally served with onion, radish, lettuce, lime, chili (sometimes avocado and cilantro) on top. It is still served on holidays and at special events, but not according to its origins.

Mole
The savory thick, rich sauce of Mexico, Mole is made with ground chilies and up to 20 other ingredients, depending on which kind you have. There are seven standard moles: amarillo (yellow), chichilo, coloradito, manchamantel, mole negro (black), rojo (red), and verde (green). Mole Negro is famous, as it’s made with chocolate, giving it a savory and sweet flavor. Mole is served over meat and rice. This dish is most popular in the Mexican states of Oaxaca and Puebla, where you are most likely to find it.

Tacos al Pastor
Tacos al pastor (translated "in the style of the shepherd ") dates back to when Syrian and Lebanese immigrants came Mexico in the 1920-30s and brought the tradition of shawarma spit-grilled meat with them. Instead of Lamb, Pork is marinated in chili sauce and pineapple and then roasted on a revolving skewer called trompo (or spinning top). When finished, the meat is cut off the skewer in very thin slices and served as a taco with onions, cilantro and pineapple. Its origins lie in Central Mexico where it is most popular.

For combat and hunting, Ancient Aztec, Maya, and Inca tribes found tamales to be fast and easy for travel food in a small package (the energy bar of the ancients). Today they are a great food for any occasion! Dough made from corn or maize is filled with meat, cheese, beans, vegetables, mole, fruits or other sweet fillings and wrapped in a banana leaf or corn husk to hold it together. It is then steamed to cook it. If you read this on time, remember not to eat the corn husk or banana leaf wrapping. And don’t worry if you did, you are not alone. 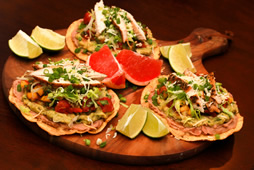 "Toasted" tortillas or deep fried corn tortillas are called tostadas. These may have been the solution for stale tortillas in the past, but their popularity keeps that from being the case now. After frying, the flat tostada is hard and ready for the piling on of various delicious items (similar to a taco, but you can get more on it since it’s not folded).

The great thing about Mexican food is that many of these can combine together...enchiladas, flautas, tamales and tostadas, can be made with al pastor meat or carnitas. Enchiladas can be covered in mole and tamales can be filled with mole. The list goes on.

Now that you’ve got your list of the "can’t miss" foods, belly up and head to Mexico!