Tips for Moving to and in Mexico

I realize that my move to Mexico wasn’t typical compared to other Americans or Canadians who make the choice to go south. I came here with one car-full of necessities and a furnished home waiting for me back in the U.S., planning to only stay for six months. Some weeks later I met the woman I would marry, and thus I had to think about moving more stuff.

We North Americans have a lot of stuff. If you want to make your big move down Mexico way you will probably want to minimize your volume of stuff. Many folks have garage sales and donate to charity. On the other hand, if you have the means to open a store-front or tienda once you get to Mexico, there are no big second hand stores in Mexico. People don’t donate to the Goodwill. You can easily sell excess stuff once you get to Mexico. There are certainly some things that you do want to bring because they are harder to come by and/or more expensive to buy in Mexico.

The first thing that comes to mind for me is books. I always wish I had brought more English books. Buying them online takes much longer, and the shipping costs are much higher, so going to Amazon isn’t as viable an option as it is in North America. If you have moved beyond paper, good for you: bring some sort of e-reader with you. 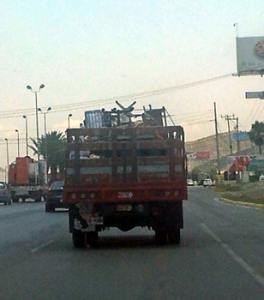 Laptops and desktop computers are more expensive in Mexico and they come with Spanish language keyboards. I’m afraid that having the ‘n’ with the squiggly line above it isn’t worth the cost difference if you are coming from the U.S.

My in-laws in Mexico often take shopping trips to the U.S. border. Quite often they buy clothing because many of the U.S. and international brands are much more expensive in Mexico.

On my second trip to the U.S. I was sure to bring my tool set with me, as power tools are a bit more expensive in Mexico.

As far as packing up a big truck and moving it all at once: I can’t really speak from personal experience. I’ve only crossed the border with my Jetta packed to the brim, and haven’t had any troubles with the authorities. I still have a lot of my stuff in storage back in Washington State. When I can I will get a truck and cram the rest of my accumulated belongings to my home in Mexico. That’s relatively easy to do for me, I’m not yet 30 so I haven’t acquired as many personal effects as the average retiree/expat.

I’ve heard and read stories of people buying big six-wheel freighters, putting together an inventory, dealing with weigh stations and port authorities. If you come to the border with a truck of stuff you can expect to have to unpack it, and perhaps to pay a bribe or mordida. The bigger the payload the bigger the bribe. I wouldn’t imagine having to pay more than $100 for the proper stamp.

I’ve just been in the process of moving to a different part of town here in Saltillo. As a former student and soldier I’ve moved around plenty. Before coming to Mexico I’ve never had the assistance of paid movers. I’ve always needed to borrow a truck from a friend or family member, and assemble a volunteer moving team of friends and family.

Here in Mexico, it’s more practical to pay for the help of a six-wheel freight truck with a driver and crew for about 100 bucks per load, since labor prices are so low. However, to keep temptation away, I would cover and/or transfer your valuable things like cameras and computers so nothing happens to them.

I wish any of you potential expats luck on the road; keep your fingers crossed for the green light at the checkpoints.