My Passport is Expired, Now What?

“I’m going to Mexico in a week, and I just found out my passport has expired!”

It happened to me. One week before my trip to Mexico, I decided to start packing. First things first, I went to dig out my passport. It had been on my mind all week. When I opened the passport book, my passport had expired, and it was Saturday!

My first bit of advice to anyone reading this article is to check your passport expiration date before you make reservations to travel outside the country — it was too late for me. I had to figure out how to renew my passport fast! 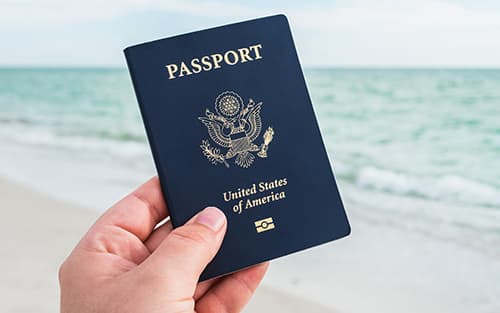 Who Needs a Passport to Travel?

According to the U.S. Citizens and Immigration Service (USCIS):

“U.S. citizens need a passport when traveling to, or returning from, most foreign countries.” There are a few exceptions, but they are hard to meet, last minute.

What Are Your Options for Getting a Passport?

I quickly sifted through the Mexpro blog articles, looking for any possibility that I could use a birth certificate to get into Mexico, despite knowing I would find nothing.

Next, I called a well-traveled friend, and she related an experience she had before Covid, where she lost her passport less than a week before she was traveling. She went through the post office and was able to get a new passport the day before she left the country.

I found a webpage about the U.S. Post Office passport processing rush service. Unfortunately, when I went to the Post Office, they informed me that they have not been assisting with urgent passport renewals in several years.

I got on my computer and went to travel.state.gov, the U.S. State Department - Bureau of Consular Affairs Website. On their “Get My Passport Fast” page, I found that there are four options for getting a passport renewed.

I also found a renew online option on the travel.state.gov website. When I clicked the link it took me to another website, where I was afraid to provide my social security number, but I did anyway. When I hit the submit button, the page did nothing. I tried four times.

There are only 26 Passport Agency locations in the U.S. where you can get an in-person appointment to get a passport or get it renewed. Lucky for me, there is one in Los Angeles and one in San Diego, which are relatively close to where I live in Las Vegas.

My situation was considered “Urgent Travel,” since I was supposed to leave in less than 14 days. So, at 6 a.m. Monday morning (9 a.m. Eastern time) — with only five days left until I was supposed to leave for Mexico — I called the toll-free 877 phone number above to make an appointment to get my passport renewed. I was on hold for 40 minutes and still could not get an appointment until Wednesday morning in San Diego. Even though the Los Angeles agency is closer, there were no appointments left that week.

After making the appointment, I realized I did not even know for sure that I would get a passport on Wednesday. I decided to look around a bit, thinking that maybe I could find a faster option. Here’s the process as explained on travel.state.gov.

One of Mexpro’s blog writers, Ann Reid, lives in Ensenada and operates the Moving to Mexico Facebook group with her husband Ron. I asked her if she had any advice. Her response was, “You’re going to have to try to get a same day or 24-hour passport. Google ‘same day passport Las Vegas.’ A lot of these services went away during the pandemic, and I don’t know if they’re back.”

So, I Googled ‘same day passport Las Vegas’. I called a company and talked to a man who explained his company’s process. It sounded like the same steps I was going to take without them — get an appointment with a processing center, get a new passport, and send it to me. Except he was going to charge $800! And the information above says, “The new process will ensure third-party services cannot book appointments.” I’m not sure that would even work.

Since I already had an appointment, and wanted to be sure I got a passport, I decided to get my passport on a budget and drive to San Diego for the appointment I had on Wednesday.

How I Got My Passport Fast

On Tuesday night, I packed up a few items of clothing and drove down to San Diego for an 8:30 a.m. appointment the next day.

I am not familiar with downtown San Diego and was nervous about missing my appointment, so when I found the building, I turned into the first parking lot I could find. They are all pay lots. If you are going to the passport office, this is a mistake. You’ll pay as much as $35 a day for parking. It is MUCH less expensive to park underneath the Columbia building for $16/day.

When I got to the office for my appointment 15 or so minutes early, there was a long line, which stressed me out. But when the doors opened, we were processed quickly. It was 15-minutes or less before I entered through the double doors and went through security (very similar to airport security, but much nicer).

I waited in another short line to reach a window, where the attendant took all my documentation. You must have the following: 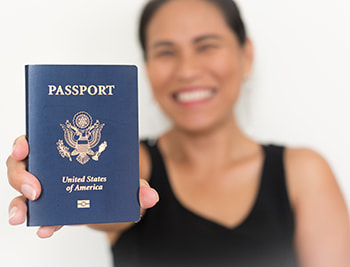 The attendant reviewed my documentation to be sure it was correct and that I had everything I needed, and then gave me a number (that would be called by another attendant at a different window). I waited 5-10 minutes before my number was called. At the numbered window, my paperwork was again reviewed and then they took my payment. I was told to come back at 2:30 pm to pick up my passport if it was approved.

I wasn’t sure what I would do while waiting to get my passport between 9 a.m. and 2 p.m. I didn’t want to move my car since I already paid for the day and Google was not showing me any Internet cafes in the area. As I zoomed out on the map on my phone, I realized I was only a few blocks from the waterfront. So, I headed there and did some walking, visited the USS Midway Museum, and checked out the Fish Market.

At 2 p.m., I showed back up to get in line again outside the passport office. The line was already getting long, longer than when I showed up in the morning. It was good to get in line early, though.

There were a lot of people talking about their upcoming travel. Some were even leaving that day! There was a woman who was taking her child out of the country to see his father, who was stationed abroad with the military. She didn’t know a child’s passport only lasts five years. (If you were under 16 when your passport was issued, your passport is valid for 5 years.) She was there trying to get her son a passport so they could leave the next day.

The passport office opened at 2:30 p.m. sharp, and the line moved quickly. We had to go through security again, but within 15 minutes I had my new passport, and I was driving back to Vegas. It wasn’t convenient, but it was easy.

If you find yourself in the same predicament I was in — traveling in less than 14 days and find that your passport has expired, you should be able to get a new one. Just call the State Department’s urgent travel toll-free passport number as soon as possible (1-877-487-2778 8 a.m. - 10 p.m. EST Monday - Friday). If you can’t get an appointment or don’t live near a passport agency you can try to go through a U.S. Post Office or a private agency. Good luck! I hope you don’t need it!