A Guide to Mexican Recipes

It's for good reason that UNESCO named Mexican cuisine to its Representative List of the Intangible Cultural Heritage of Humanity in 2010. Mexican food is an integral part of the overall culture of the country. For example, mole is traditionally part of the celebration of special occasions and holidays. Mexican cuisine is also one of the most popular cuisines in the world.

Chilies, corn, and beans are three staples of traditional Mexican dishes. These ingredients were all cultivated in Mexico before Europeans arrived in the Americas. Corn is eaten in multiple ways and is perhaps the most important food of this cuisine; corn tortillas in particular are used in a wide variety of dishes. Other essential staples include avocado, rice, and tomatoes. 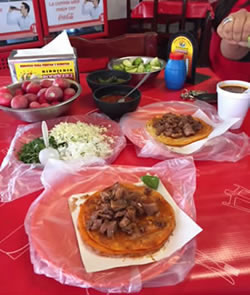 Mexican cuisine began to develop about 9,000 years ago when the Maya started domesticating maize. The societies that came after the Maya, including the Otomi, Mazatec, Huastec, Toltec, Totonac, Purepecha, and Zapotec, all continued to develop different crops and farming techniques and adopted different cooking methods throughout the Mesoamerican period. During the period of the Aztecs, foods like agave, amaranth, avocados, chia, cacao, chili peppers, cactus, turkey, tomatoes, tomatillos, squash, and sweet potatoes became part of the burgeoning Mexican cuisine. When the Spanish conquered the Aztecs in the early 1500s, they also introduced new foods to the region, including chicken, goat, pork, sheep, and beef, along with dairy products and rice. The influence of African slavery in North America also introduced new foods and cooking methods into Mexican cuisine.

The different regions of Mexico all have unique regional cuisines. In the north, essential dishes include aguachile, burritos, carne asada, chilorio, machaca (dried shredded meat), burritos, and guacavaqui. The burrito is very popular here and typically served with beans cooked with pork. However, the coastal areas of the region contribute lighter seafood dishes to the cuisine, including ceviches like aguachile.

The region of Oaxaca is viewed as a culinary hot spot. Sometimes, it is referred to as the Land of the Seven Moles. The principal dishes of the region include the seven moles of Oaxaca, which are amarillo, chicilo, negro, verde, rojo, coloradito, and manchamantel. Other traditional recipes of the area include tlayudas (sometimes described as Oaxacan pizza), sopa de guías, chapulines (fried grasshoppers served with guacamole in a tortilla), champurrado, and chocolatole. 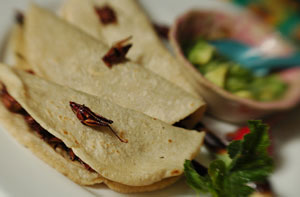 Veracruz is shaped like a crescent, stretching out over 400 miles of coastline. The access to the Gulf of Mexico means that this region's cuisine is rich in seafood. However, inland cities like Xico feature rich moles and heavy use of jalapenos. Vanilla originated in the state, near the town of Papantla. The main dishes of the region include a tomato dish known as pescado a la veracruzana, a saucy paella known as arroz a la tumbada, and mole de Xico.

The northern Pacific coast is a vibrant agricultural center, growing a lot of Mexico's fruits, vegetables, and grains along with producing chilis and a variety of cheeses. The main dishes of the area include birria, chilorio, and pozole. The most famous dish is birria, a stew made of beef or pork cooked with chili peppers and spices. Tequila is produced in Jalisco and is renowned around the world. And the coconut plantations along the coast lend coconuts to the cuisine, while the coastline itself provides a wealth of seafood options.

Typically, Mexican cuisine is consumed in three meals. Breakfast comes first, followed by lunch, which is usually a four-course meal consisting of soup, a rice or pasta dish, a main dish, and dessert. Dinner is a smaller meal or just a snack. On the weekends, breakfast and lunch are often served as one meal, and a larger evening meal is served.