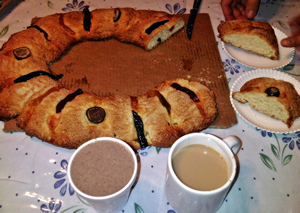 Mexican posadas are a tradition dating back 400 years that take place during the Christmas season in Mexico. Originating in Spain, the nine day posadas festivities occur between December 16 and December 24. Posadas are celebrated mostly in Mexico, Guatemala and some areas of the southwestern United States. The nine day celebration represents the nine months of Mary’s pregnancy. One of the largest fiestas in Mexico, all towns and cities participate in a similar version of these festivities.

"Posada" means "inn" in Spanish. And the custom represents Mary and Joseph's search for a place to stay in Bethlehem. Each evening the Posada commences with a march through the city's streets, holding candles, while Christmas carols are sung. Oftentimes there will be people dressed to represent Mary and Joseph. The procession could include Mary riding a donkey, and others dressed as angels and shepherds.

Each evening the group makes its way to a particular home and sings a song, and each evening they will visit a different home. The song, usually La Cancion Par Pedir Posada, involves the group standing outside the entrance to the home beckoning the "Inn keeper" to allow Mary and Joseph to stay the night. Conversely, those inside the home respond that there is no room in the Inn. Back and forth they go until the "Inn keeper" welcomes the crowd into the home.

Once the group is allowed to enter, a celebration takes place that can be very large, or small and intimate. It often is begun with a prayer and spiritual meditation. A big part of the posada is socializing and the enjoyment of food and drink served after the rituals—usually tamales and ponche or atole. Piñatas in the shape of a seven-point star (representing the seven deadly sins) are broken to finish the celebration.

Posadas often include masses, events around nativity scenes in the cities and homes, and gift giving.

Here is a video of a Mexican posada with the creation of the ponche included...https://www.youtube.com/watch?v=Wej2_EoOjAs