The Magi are the Santa of the American Christmas tradition. 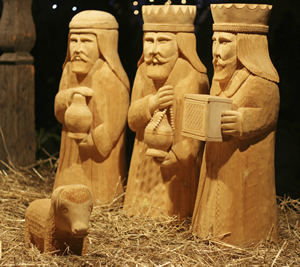 Today is Three Kings day or El Dia de los Reyes in Mexico. Also called the Feast of the Epiphany, it is a day commemorating the three Kings (los Reyes Magos or Magi) who traveled great distances, bearing gifts in the Bible story of Jesus’ birth. Similar to the Christmas tradition in America, children receive gifts on this day. The Magi are the Santa of the American Christmas tradition.

Three Kings Day takes place 12 days after Christmas, or the 12th day of Christmas. Traditionally the three kings figures are placed in the nativity scene on the evening of January 5th, also known as Kings Day. Children write a letter to the Kings asking for gifts. In some parts of Mexico these letters are tied to helium balloons and are allowed to take to the sky.

Filled with hay, children leave their shoes next to the figures or under their bed, to feed animals belonging to the three kings. Sometimes the hay is left outside the front door, with water for the animals. Similar to goodies left for Santa, cookies and milk are sometimes left for the three kings, Melchior, Caspar and Balthazar (representing Europe, Arabia and Africa). On January 6th, children awake to find the hay removed and replaced with gifts. 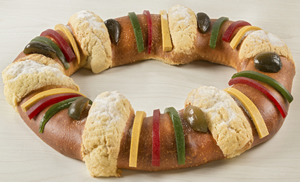 Dia de Reyes is a feast day, where great meals are prepared, and city streets are filled with food stands, gifts and fiestas. The token food associated of this holiday is Rosca de Reyes, a wreath shaped bread, topped with candied fruit. A baby Jesus figure is baked inside the bread to symbolize the urgency of finding a secure birth place for baby Jesus.

Each person at this feast must cut a piece of bread, the knife symbolizing the danger Christ child was in. The lucky person who eats the piece of bread with the baby Jesus must host a tamale and hot chocolate feast on Dia de Candelaria (Candle mass day), February 2nd, when Nativity scenes are put away until the next season.