Day of the Dead Holiday in Mexico Celebrates Death

Day of the Dead, or Día de los Muertos, is a Mexican holiday that celebrates the lives of those who have passed away. It begins at midnight on October 31st and lasts through November 2nd. It is believed that the spirits of the dead come to visit their loved ones during this time, which makes for grand celebrations in Mexico.

Day of the Dead is celebrated all over Mexico, as well as in other countries with large Latin American populations like the United States. 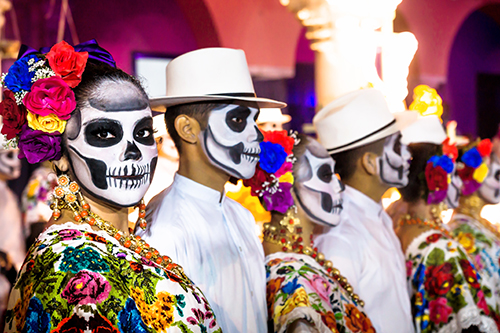 Day of the Dead Origins

The origins of the Day of the Dead can be traced back thousands of years before the Spanish invasion. The Mayans, Aztecs, and Toltecs honored their dead ancestors with month-long celebrations that began around the end of August.

The skulls of slain enemies were often kept as trophies and would be brought out and put on display during the death celebrations. And this tradition lives on with the candied skull decorations displayed and sold during Day of the Dead in Mexico today.

Lady of the Dead 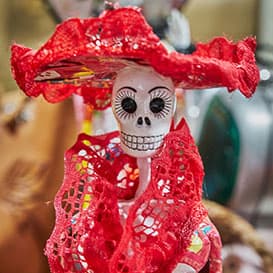 The Aztec goddess of the dead, Mictēcacihuātl, was said to watch over the bones of the dead. She has evolved to become La Calavera Catrina, the modern-day Lady of the Dead, who now presides over the Día de los Muertos festivities.

Skull masks were also often used during ancient death ceremonies, and that tradition appears to have morphed into the modern-day practice of painting one’s face to look like a candied sugar skull.

When the Spanish conquistadors arrived in Mexico, they tried to abolish the holiday, but they were unsuccessful. The holidays were eventually combined with All Saints’ Day and All Souls’ Day, two Christian holidays.

How Is Day of the Dead Holiday Celebrated in Mexico?

One of the most important aspects of Day of the Dead is the construction of the altars (called ofrendas – or offerings), which are traditionally built in homes and cemeteries, to commemorate the deceased. 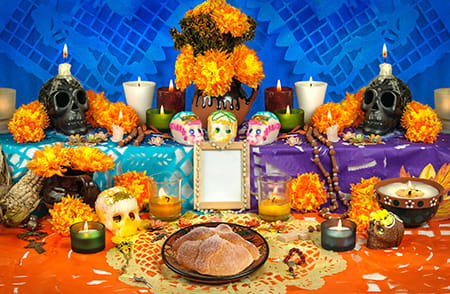 Each altar has its own character, since it is created in order to attract the spirit of the deceased. These elaborate constructions are decorated with photographs of and favorite items belonging to the lost loved ones, along with other objects of remembrance. Altars can also match a theme specific to a region.

In addition, families will prepare special dishes and drinks enjoyed by the deceased relatives and leave them out on the altar for them to enjoy.

Marigolds, also known as flor de Muerto (flower of death) or cempasúchil, are part of Día de los Muertos altar decorations, as they are believed to guide souls back to their altars during the celebration.

Candles and incense are also lit to help the familial spirits find their way back to the altar each year. On occasion, a wash basin, with soap, and a towel are also included in the offering, so the dead can wash up, once they reach the altar.

The three-day Day of the Dead celebration begins on October 31st, All Hallows’ Eve, or Halloween in the U.S. According to the tradition, the heavens open at midnight and the souls of deceased children descend to earth to be with their families for 24 hours. The same happens for adults who have passed away at midnight on November 1st.

November 1st, called Día de los Inocentes (Day of the Innocents) honors babies and children who have passed away.

The final day of celebration, All Souls Day, takes place on November 2nd. It is also a National Holiday. On this day adults who have died are honored mostly with visits to cemeteries. Family and friends spend the day remembering happy times, and cleaning and decorating graves.

Of course, no Mexican holiday would be complete without a fiesta, and Day of the Dead is no exception. Besides solemn remembrance, festivals, dances, and parades are held throughout Mexico during this time, with many people dressing up mostly as skeletons and La Catrina.

The Day of the Dead is one of the most important and elaborately celebrated Mexican holidays. Though the day is for remembering the dead, it is not a morbid affair.

On November 2nd in any town or city in Mexico, in the downtown area and/or cemetery, you are guaranteed to see a celebration unlike anything north of the border.

Learn More About Day of the Dead

Day of the Dead Holiday in Mexico Celebrates Death