A Pilgrimage to Our Lady of Guadalupe in Mexico 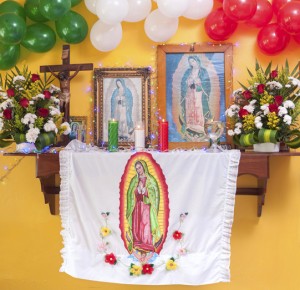 The Basilica of Our Lady of Guadalupe is one of the most sacred of holy sites in Mexico City. The Virgin Mary is said to have appeared before a man who later became a saint at the location of the church.

The legend states that in 1951, Juan Diego, a man recently converted to Catholicism, was traveling Mexico City by foot when the Virgin Mary appeared to him. Diego was told in the apparition to build a church at the precise location where Mary appeared to him. Diego then went to the Catholic Bishop and described the instructions he was given. Skeptical, the Bishop requested more proof. Diego then received a second apparition and this time he was given roses, during the dead of winter, as proof for the Bishop. The story continues as Diego carries the roses in his apron to the Bishop. When he removed them from his apron to present to the Bishop, an imprint of the Virgin's face was left there. Immediately the Bishop ordered construction of the church.

This apron is displayed on the walls of Juan Diego hangs on the wall in the basilica of Our Lady of Guadalupe church. The grounds of the church now include a new basilica, and both the old and new are dedicated to the Virgin Mary. Tourists are welcomed at the church, which is the most visited of all Catholic shrines in the world. The church holds up to 50,000 people and includes a number of private chapels where masses are celebrated several times every day. Confessions are also heard every day from 6 a.m. to 6 p.m.

The largest crowds can be found at the church during the feast of Our Lady of Guadalupe on December 12th, which is the day the Virgin Mary first appeared to Juan Diego. Crowds of more than six million people have made the pilgrimage to the site for the anniversary and celebration. The Basilica is located in the northern suburbs of Mexico City in the neighborhood called Villa de Guadalupe Hidalgo.