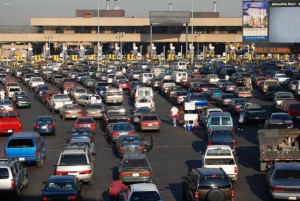 I’m not a professional driver, per se. I did have a special Humvee driver’s license when I was in the US Army, and I drove mail trucks for the postal service in Seattle. But I’ve never been an expert in long-haul trucking or held a special classed state driver’s license. I’ve never even had a motorcycle endorsement.

But as far as road trips go: I love them and I have gone on plenty of them. It’s my favorite way to travel. I’m preparing to drive home for the holidays myself. I live in Mexico, and the rules are a bit different here. I generally ask my wife (who is a Mexican national) to take the captain’s chair when we are traversing unfamiliar Mexican roadways.

I’ve been living here for two years now, and I am finally confident enough to drive solo on international road trips, which many Mexican nationals avoid doing alone (for example, driving to the US border from my current home city of Saltillo). I reached this confidence over my years of observing, learning the culture and language, and also getting a feel for safety situations south of the border. However, even if you’re not a veteran expat, Mexico’s roadways are very navigable so long as you come equipped with the proper knowledge and tools.

Every border crossing I’ve seen in Mexico has been guarded by Mexican army soldiers and/or marines. There’s a good reason for this. It’s easier to corrupt police, and for a long time the police would try to shake-down tourists entering from the US. I witnessed this before the drug violence escalated, back in 1998 when driving to Mexico with my family for the holiday season.

My step-father, who spent ten years as a police officer in Mexico, knew the nature of the shake-downs. Since my parents and my five sisters and I were in a large van, which was packed to capacity with gifts for my step-cousins, and evergreen trees were strapped to the top, we had to pass through the lane for declarations. In that case, I’m sure we had to declare the trees as a minimum.

Every time I’ve passed into Mexico since, I began living and driving here in October of 2011, I’ve never bothered to bring anything to declare. Mexico is very rigid on importing commercial goods, and the import tariffs are very high compared to US codes. Thus, it’s a good policy to take electronics and other goods out of their original packaging, so there won’t be any question as to whether or not they aren’t for resale.

Once you’ve passed the border, you will see an immediate and dramatic change in atmosphere. From architecture to general cleanliness, to a very large population of working poor on the streets, asking you to buy their goods or services. It’s fine to buy the fruits and snacks, toys and window shades, or to pay them a couple of pesos for washing your windshield. Its well worth the value if you have some spare pesos lying around: they are hard-working people and its how they make their living. Understand that they try to sell to everyone: not just to gringo tourists. The main point is to pay attention to them, and to kindly decline if you’re not interested, a friendly wave and shaking your head is fine.

If you plan to drive further into Mexico, and you’re destination isn’t Rocky Point or within the Baja Peninsula, make sure to get you vehicle permit. You can find details on the costs of the permits (and how to retrieve your deposit) in other articles on this site.

After about 10 or 20 miles into Mexico from the border, you are bound to run into a checkpoint. Make sure you have a driver’s license, your permit sticker, your visa and your passport. Present them to the customs official with a kind demeanor, and you’ll be fine. I’ve never had problems here. Sometimes I’ve forgotten to put my permit sticker on my windshield, and the official had me apply it to the glass right there on the spot, which was for my own safety.

From there, you’re out of the fire of the border city and in a very foreign and very open country with different rules, a very different culture, but with many new precautions to take. Check back next week for Part II and more advice on driving to your Mexican beach paradise destination.