Three generations of the Gilmore clan have been traveling to San Felipe for nearly forty years to enjoy the beach camping. When I say beach camping, I mean pulling your vehicle off the main road that heads into town and hotels, and driving onto the beach. The execution must be perfectly timed with the tide—and requires gunning the engine of your SUV or truck to get on top of the soft sand, beyond the reach of the tide.

Once you’re in you can set up camp beneath the cliffs along the Sea of Cortez. This was my kind of vacationing. I enjoy hotels with all the amenities, but there is nothing quite like getting back to the basics of camping. 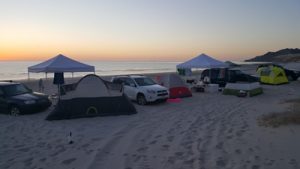 Campfires at night with friends and family while toasting marshmallows for s’mores, sitting on the beach with my feet in the ocean--margarita in hand, and catching jellyfish; these were just a few of the things I enjoyed the most.

Ten years ago was the last time the Gilmores made the trek from San Diego down to San Felipe. The large gap between visits was due to concerns about safety, since their choice was to camp on a Mexican beach, miles from civilization.

When my girlfriend, Jules (Gilmore), and I visited her parents for Christmas 2015, she, her siblings and parents reminisced about their family outings on the beach in San Felipe. After some discussion and vacillating, the Gilmore’s planned their return to where they had some of their fondest memories as family.

Security concerns seemed less of an issue, since recently some of them had traveled to Los Cabos without incident. There was abounding confidence that the trip would be safe. Thankfully I was invited to partake in this Gilmore family tradition for the first time.

Fast forward to May 28th, 2016, Jules and I, and our two rescue puppies joined the four vehicle caravan of Gilmores headed down into Mexico from San Diego. With homemade breakfast burritos packed, and a hot cup of coffee in the cup holder, we left the family home for the Tecate border crossing. It only took twenty minutes to reach my first US/Mexico border. Since I know only a handful of words in Spanish, I was slightly nervous, especially with two dogs. Yet, we were quickly waved through and heading to our destination. No vehicle search, no documentation checks for us or the pups. Hakuna matata, or no worries. 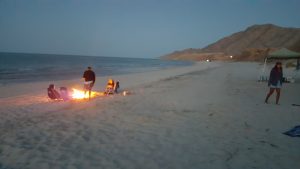 The next three hours of driving through the Mexican countryside were incredible. I have traveled throughout the United States and to a few different continents, and yet the drive to San Felipe was absolutely stunning. The change in scenery from far stretching prairies to treacherous mountains roads, to beautiful white sand beaches was something I’ve never experienced. Every half hour the landscape was vastly different from where we just were.

One Gilmore family tradition, I thought was the coolest thing, was each car had their own walkie talkie. Instead of listening to the radio or being confined to talking with the people within your car, full conversations were carried on among all the vehicles through the walkies. Dinner plans for each night were made, jokes were told, and everyone caught up with each other during the drive.

Personal conversations weren’t the only use for the walkies. Driving along a two-lane highway for three hours, you are bound to get stuck behind slower moving vehicles, particularly semi-trucks. Passing semis can be treacherous, especially on some of the rolling hills we drove through. We used the walkies to pass slower traffic, with each vehicle giving the green light to the vehicle behind them.

Another great use was communicating the tolls to each car behind the lead. One of the best quotes of the trip was when one of Jules’ siblings freaked out over the walkie screaming, “Oh crap I forgot to get pesos! How much is that in dollars? Oh, crap I hope I have enough!” Everything was easier, smoother and more fun with the walkie talkies. The caravan wouldn’t truly have been one without them.

Whenever you travel to a favorite location there are certain landmarks you remember and even look for. For the Gilmore family, it was the rockodile billboards. They are a reference to the large founding business that helped to put San Felipe on the tourist map. These two billboards were not only unique and fun to look at, but in a time before GPS, they were used as time markers for the Gilmore family—answering the famous road tripping question “are we there yet?” The fifteen-minute countdown after passing rockodile billboard number two to arriving at Campo El Pescador (Fish Camp near San Felipe) had begun.

When we were about ten minutes from San Felipe proper, all four vehicles of our caravan turned off onto a dirt path that crossed the four lane highway we were then traveling. Cliffs and mountains surround the us, as the dirt road was nestled between a gap in the cliffs along the beach. After some quick negotiations with the locals that own the area to lower the price to enter the beach, we took off onto a sandy stretch of road that winds through a mini canyon down towards the beach.

Most of the sand on the way down to the beach was hard packed enough for the vehicles to drive on normally. However, right before we got down to the soft sand everyone knows and loves on the beach, we had to stop to prepare the vehicles.

The driver of each vehicle exited and began releasing air from their tires, the target pressure being around 15 PSI. Little did I know how crucial this was to drive across the softer sand along the beach.

One by one each vehicle had to cross a 50-meter stretch of sand to reach the hard-packed sand on the beach proper. The timing was critical; if we had not entered the beach at the right time of day, the tide would be too close for the vehicles to reach any hard packed sand. We were lucky and arrived while the tide was heading out.

I have driven through some rough weather growing up in northeast Ohio; snowstorms, hail and rain coming down so hard you can barely see the hand in front of your face. Driving in those conditions is relatively easy for me. However, I am unaccustomed to driving in sand, it’s a whole other beast.

I received instructions from Jules’ father: when I hit the 50-meter stretch, I needed to be going at least 40 MPH. He was first in our caravan, he proceeded to show me how to do it. I watched him gun his Lexus over the sand. At one point he hit a bump and launched a good foot or two off the sand, but successfully made it down onto the hard pack. He made it seem so easy, but he had years of experience.

As the second car in the caravan, I was up next. Unfortunately for me, my pride in my ability to drive got the better of me. I hit the soft sand at about 20 MPH and successfully sunk my car with no hope of getting out on my own.

Lucky for us (me and my bruised ego), what I can only describe as a miniature monster truck was camped just a stone’s throw away from us. He drove up and offered help in dislodging my vehicle and got us out with ease. How lucky and thankful I was.

The next three days were spent listening to classic family stories and enjoying many camping experiences, like: building a campfire pit used to cook s’mores, setting up a tent and sleeping bag from which to enjoy the night sky as I fell asleep to the ocean’s calming noise, sandcastle building competitions, and playing everything from bocce ball, to horseshoes, to card games.

There were also a few unusual experiences: jury rigging a kite, climbing harness and skim board to attempt kite surfing in the Sea of Cortez, hitting golf balls on the beach and aiming for old tires left behind by the tide.

We drove into town to get fresh shrimp right off the boat for camp-made shrimp scampi and picked up fresh, handmade tortillas. I can’t strongly encourage this enough, BUY AS MANY TORTILLAS AS YOU CAN AND BRING THEM HOME WITH YOU! Each car in our caravan brought back five to seven packs of tortillas.

As if this all wasn’t enough to make this a wonderful vacation in Mexico, the next part of my experience made it best moment in my life. I have been describing my experience of this trip to San Felipe and first time to Mexico. I was also reliving the perfectly preserved memories of my girlfriends, some of the best of her childhood. I could see it by the twinkle in her eye when we first talked about it on Christmas 2015. When we made plans to travel to San Felipe, I knew it would be the moment I proposed to her.

On the last day of our vacation in San Felipe, Jules and I took an early morning walk along the beach with our puppies. The hardest part of figuring out how to propose was to include our puppies, which we consider our four legged children. I personally thought my solution was clever. I brought along a tennis ball for them to chase, it would be the only way I could get them to hold still long enough for the moment I wanted her to remember for the rest of her life.

As the sun crested over the ocean, I asked her to make the dogs sit before she made the next toss. As the pups were patiently waiting, I dropped down on one knee and began the speech I methodically prepared. Just as I was about to I ask Jules to marry me, the youngest puppy lost interest and began to wonder away, while the eldest jumped on Jules to get the ball. I should have expected that from them.

Yet, the moment wasn’t ruined, it actually couldn’t have been a more perfect. In that single instance, our beautiful family dynamic showed. That’s how I will always remember proposing to my now fiancé--her cracking up laughing as she watched Theodore trot away with disinterest, Kovu spazzing out about the ball he desperately wanted, and I being the hopeless romantic.

The perfect ending to the perfect vacation and my first time in Mexico. Looks like I have a family tradition to uphold. I’d better learn to drive in soft sand!

I have my bosses and co-workers at Mexpro to thank for providing me the opportunity to have this amazing experience in Mexico. They wanted me to see for myself that it was safe, fun and extremely hospitable—and they covered for me while I was gone.
Get My Quote Now