Mexico's Independence Day Celebration--It's not in May 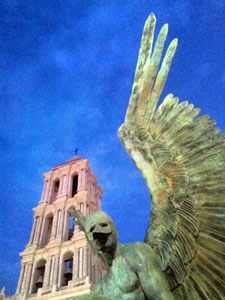 I grew up with a Mexican step-father so I've always been savvy to the fact that Cinco de Mayo is not his nation's day of independence. In fact, when I was here in Saltillo in May the day seemed to pass without mention. It's more celebrated in the United States, and for good reason.

A brief look into Mexican history taught me that on the 5th of May of 1862 there was a crucial battle in the central Mexican state of Puebla against an out-numbering and better equipped French military. Napoleon III had plans for an American Empire, and aimed to use Mexico as a base to rock the U.S. This battle was also during the first years of the American Civil War. Had the French managed to establish a base in Mexico it could have fatally affected the outcome of our own civil conflict. Thus, the holiday is mostly celebrated in the U.S., originally by Mexican-Americans, and more so since the 1980s by the mainstream to sell beer and other delights.

But enough history; this is my first September in Mexico. All the flare of national pride I'm seeing is like the lead-up to the 4th of July, but on steroids. The red, white and green motif makes it look a bit Christmassy even. Every major grocery has a kiosk selling flags, banners, noise-makers, sombreros and other festive things bearing the nation's colors. However, it is not legal for people to wear the flag that bears the eagle crest: quite different from the starred and striped clothing which are popular among the patriotic American crowd.

The Mexican flag itself has changed quite a bit since the inception of the Mexican republic, though always bearing the same three colors, which have represented things such as independence, religion, union, purity, hope, and the blood of heroes. The Last change was made in 1968. 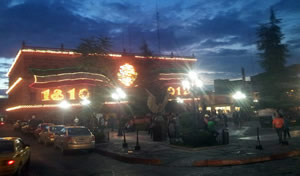 Downtown Saltillo in the central square called La Plaza De Armas, the national colors are in bright display with "Viva Mexico" lettered on the governmental palace in what, to me, looks like Christmas lights. When I was visiting this plaza during December there was even more holiday flare (not quite as secular here) with a giant synthetic pine tree.

A special treat that we are enjoying in the plaza alongside the celebration of independence are a series of bronze statues by Mexican sculpturer Jorge Marín. The collection of his 13 pieces titled "The Wings of the City" feature angelic figures dancing and balancing on spheres and wearing masks that resemble those of the medieval plague doctors of Europe. This public treat also has a pair of gold wings that a tourist can pose in front of and look like they too are an angel.

If you're in Saltillo, or most any Mexican city or town on the 15th of September, head downtown around 11 p.m. That's when "The First Mexican Night" celebration begins. I myself am looking forward to the fireworks. I hope not to be penalized for not knowing the national anthem.