As you may have read in my previous articles, the Fifth of May is more of a regional holiday in Mexico. In the US it’s sort of a Mexican pride holiday where people parade the tri-color flag and Mexico’s emblem all over the place. For a lot of people, it’s mostly just another reason to throw a party, one featuring their favorite Mexican-American dishes along with margaritas and beer imported from south of the border.

In Saltillo it’s not something everyone takes part in. It isn’t anything like the 4th of July in the US, because it’s not Mexico’s Independence Day (which is celebrated on September 16th and goes back to 1810 when Mexico gained its independence from Spain.)

Kids have the day off from school for the Cinco, but this year it fell on a Sunday so no classes were cut. It’s not the sort of holiday where everything shuts down. Where I live, a small parade with a marching band was hosted on Victory Boulevard in the central district, but that street is closed off every Sunday for foot traffic, vendors and other kinds of unexceptional expositions.
To tell you the truth, I didn’t do anything out of the ordinary for the 5th. It was just another Sunday for me. However, there are regions of Mexico where it’s far more celebrated: the main one being the state and city of Puebla. Why in Puebla? That’s where it happened. 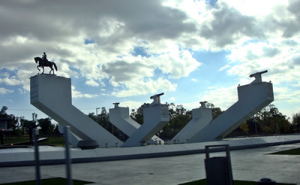 On the 5th of May in 1862 the Battle of Puebla was fought between the Mexican Army and an invading French military force. During the years leading up to the siege of Puebla, Mexico was at one of its weakest points. Not much more than a decade earlier, Mexico had been at war with their neighbors to the north (aka the United States of America) in the late 1840s. Mexico had fought a civil war in 1858, and there were more reform wars in 1860.

In 1861 Mexico’s treasury was pretty tapped out. War is very expensive and wasteful, particularly civil war. Then, Mexican President Benito Juarez made the decision to suspend all foreign debt payments for a couple of years. European nations came to the port in Veracruz to try and retrieve their money. The Spanish and British fleets reached a negotiation and left Mexico in peace.

However France had a Napoleon ruling at the time and thought they might take the opportunity to expand their empire to Mexico to have more influence in the region. The French military force of 8,000 troops arrived in Veracruz and pushed the Mexican government out of the coastal city. Puebla is the main city that sits between the port of Veracruz and the high-altitude capitol of Mexico’s federal district (or Mexico City). 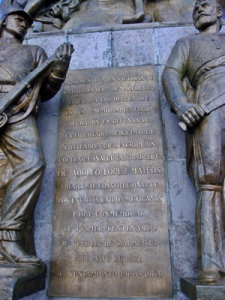 Napoleonic France was considered to be the most mighty military power of the time. That’s what really makes the 5th a day of remembrance. The Mexican troops in Puebla were only 4,500, not so well trained, experienced, and definitely not as well funded as the French were.

After the victory, Mexican immigrants brought the news north to the US, who was in the middle of the American Civil War in 1861. Some might even say that the US may have the veterans of Puebla to thank for keeping the invading French at bay during our civil war.

I went to Puebla last October and saw some of the statues commemorating the Battle of Puebla. I can only imagine what sort of celebrations go on there in May. A Mexican film called Battalla De Puebla is in theaters around the country right now, but I don’t think I’ll be able to find it with English subtitles at any of the cinemas.

I would recommend that if you want to see an authentic Cinco de Mayo Celebration you should plan to be in Puebla on the 5th of May next year.