Mexico's National Museum of Anthropology, A Must-See in Mexico City 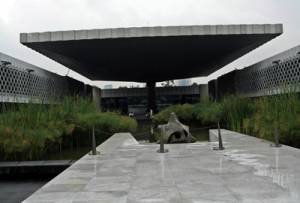 My knowledge of anthropology and ethnography are very limited. I studied just a bit of those subjects in college, but I've always been fascinated by the subject, and I enjoy watching documentaries for laymen on networks such as The Discovery Channel, The History Channel and PBS. My visit to the Museo Nacional de Antropologia in Mexico City was an up-close and personal tour through the pre and post Columbian history of one of the world's most culturally rich countries.

Reviews put this grand exhibition center on a list of the top five museums around the world. I've been to the Smithsonian in Washington D.C., and the Louvre in Paris, and I agree with that review. While seeing the exhibit, my wife and I saw tourists from all around the globe. Most of the exhibits are in both English and Spanish.

For an entrance fee of only 57 pesos, (just over four bucks, and free for seniors and students with valid identification) I spent four hours, and staying until it closed. I wasn't able to see all the different halls. The place is massive. The hours are 9 a.m. to 7 p.m. Tuesday through Sunday, so I would recommend getting there early if you want to see it all.

According to the official website, www.mna.inah.gob.mx, the museum has 11 galleries devoted to archaeology and 11 for ethnography. Archeology being the study of clues and artifacts left behind by civilizations and eras that have since vanished. Ethnography has more to do with the study of living societies, cultures and civilizations, recordings of customs, speech, song and anything else that we humans do.

The museum takes the title "anthropology" as it has to do with the study of humankind, both past and present. It's a multi-disciplinary body of knowledge that takes into account both the arts and sciences: to be more specific – natural sciences and humanities' art forms.

I would recommend first checking out the archaeology area's "Introduction to Anthropology." This is a great place to start, as it gives visitors a general idea of the current science on the origins of humans. It has displays not only from Mexico, but also ancient artifacts from around the world. The displays are great for both students and laymen to gain a general idea of how the human race came to be, as well as the how scientists believe humans made their way to the Americas as hunters, following herds of wooly mammoths across the land bridge that existed between Siberia and Alaska during the last ice age. 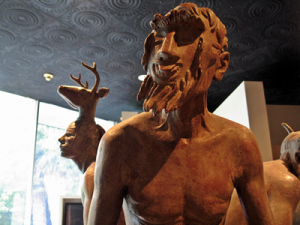 My last article was devoted to Dia de La Raza, which is always on the 12th of October in Mexico (though it is celebrated on October 14th this year in the U.S.), as that is the historic date of Columbus' arrival. The ethnographic areas of the museum are a great introduction to the native peoples discussed in the Dia de la Raza article, and the cultures of Mexico that are celebrated on that day. There's an introductory exhibit for los Pueblos Indios de Mexico, or Indian peoples of Mexico, then more specialized exhibits for the various different peoples including the Gran Nayar, Pureecherio, Otopame, los Nahuas, the cultures of the Gulf of Mexico and the Mayan peoples of the mountains, just to name a few.

I was especially interested in an exhibit that traces the core linguistics of the Nahuatl language (the language still spoken by 1.5 million people in central Mexico), believed to have been developed in modern day Oregon, U.S.—where I am from.

I wish I would have had more time to devote to visiting this museum, I got there late and it closed far too early to satiate my hunger for knowledge, and to give me the time to take fun photos with the exhibits. While you visit, remember to take plenty of photos, but no flash photography is allowed.