Happy Halloween! Halloween is a big day in the US, but even bigger are the celebrations that take place this week in Mexico during the Day of the Dead, or Día de los Muertos. Fiestas, parades, food, processions, etc. take place as Mexicans (and many Latin American countries) celebrate deceased loved ones.

Do you think you know all about Day of the Dead? Well, here's a few things you may not know... 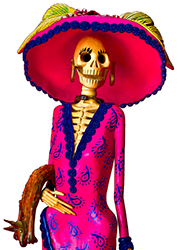 She was originally created by Mexican illustrator, José Guadalupe Posada in the early 1900's to mock Mexican's who began dressing like Europeans during the pre-revolution era.

La Catrina is one of the most iconic symbols of Day of the Dead, mimicked by many in celebrations or parades, but also in statues, candies and paintings.

2. Day of the Dead is Celebrated for two days, but three in some places.

Halloween or 'Hallows Eve' sometimes marks the first day of celebrations, but most often November 1st & 2nd are the official days. The holiday began as celebrations lasting for months among the indigenous Mexican cultures. With Spanish influence and the adoption of Catholicism, the celebration now occurs concurrently with All Saints and All Souls Days.

3. The gates of Heaven open at midnight on October 31st.

The belief is that the heavens open up at midnight on October 31st and allow the spirits of children to descend upon the earth to be with their families for 24 hours. November 1st, All Saints Day, is also called "Día de los Angelitos" (Day of the Little Angels) or Day of the Children. On Day of the Dead, All Souls Day, adult spirits come to earth to enjoy the gifts and festivities.

4. Marigolds are the official flower.

A tradition that has been passed on for thousands of years, the orange marigold is said to draw the dead person to the offerings.

5. The Skulls symbolize death and rebirth.

The indigenous cultures kept skulls as trophies. Today, Sugar skulls are an offering during Día de los Muertos, as everyone loves sweets. You will find them everywhere, especially on alters and graves.

Along the way it was translated from English to Spanish and the 'los' was added, making it 'Día de LOS Muertos.'

7. It takes place in the cemetery!

That's right, but it's not scary—at all. In the cemetery graves are decorated, gifts may be placed on them, music might be played and families pray and talk to their family members who have passed.

8. You will find elaborately decorated alters (ofrendas) in homes and cemeteries. 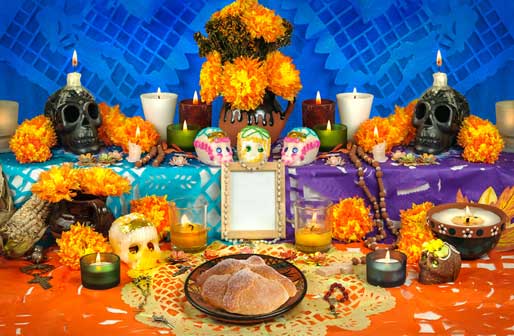 Altars are used to welcome back the spirits of the dead and encourage them to return. Candles, flowers--especially marigolds, sugar skulls, fruit, gifts and the favorite food and drink of the family member(s) are placed on altars. For children, toys will be presented also. Pan de Muerto is the popular bread offered up during Day of the Dead.

9. Día de los Muertos is one of the biggest & most celebrated holidays in Mexico.

Thursday November 2nd is even an official Holiday in Mexico.

10. Families prepare up to a year in advance for this celebration.

Día de los Muertos can be a very expensive holiday for families who may spend a year preparing.

So there you have it. Day of the Dead is a time to be happy and enjoy the memories and spirits of the those who have passed away. It is a happy time for all of Mexico!