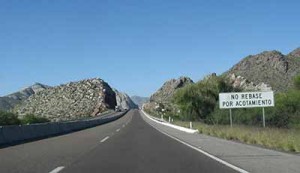 I’ve just completed a road trip myself. I drove all the way from Saltillo, Mexico, back home to the Seattle area: 42 hours of drive time down and a whole lot of anxiety behind me. The first day of driving was on the country highways of Mexico in Coahuila.

Even seasoned Mexican motorists consider the country-side roads to be risky. Most travelers in Mexico are more inclined to take a bus or plane, since some parts of Mexico’s countryside can be a bit rough around the edges. If your Mexican destination has toll ways along the route, or autopistos, I highly recommend taking them whenever possible. Not only will they be quicker, but they are generally considered to be safer from desperate people who may try to assault travelers for their car and valuable goods.

I’ve heard stories of improvised checkpoints set up on rural highways in Mexico, where people will put a log in the middle of the road, forcing motorists to stop. You are also bound to pass through military checkpoints in Mexico, where soldiers and marines are set up, usually with a BOLO (or Be On the Look Out) list of smugglers they are trying to find. I’ve never had problems with Mexican troops. They know that tourism is good for their country. It’s a good idea to at least make eye contact with the troops at the checkpoint just so they know that you intend to comply with them if they need you to stop. Soldiers and marines are generally lest corruptible and less likely to ask for a bribe.

The US State Department has warned of cartel organizations having enforcers dress in military uniforms and rob motorists. It’s recommended that if you do get robbed by force to comply with any demands. The money in your wallet isn’t worth your life, and the cartels are very ruthless and desperate.

When traversing the vast areas of desert, mountains and jungles in Mexico, you will notice how remote some locales are. It was no problem for me driving to Mazatlan, Tampico and Puerto Vallarta: my wife and I always felt safe enough. However, we had the benefit of her Spanish language and her experience in Mexico.

Last week I spent some time with some friends of mine who now live in Arizona. They spent a month driving in Mexico and Guatemala. They did so with an expat guide who knew safe motels along a well-defined route that he had developed over years of coffee bean trade between the US and Guatemala.

Coming up with a well-planned travel route can relieve a lot of the stress of traveling in Latin America. You can find contacts on expat websites, such as Mexpro, and guides such as Mexico-More Expatriates Insights the Sequel (Mexico Insights Volume 2) are rife with invitations from North American expats hoping to get a visit from other English speaking people.