The Feast of the Virgin of Guadalupe, Mexico's Blessed Virgin 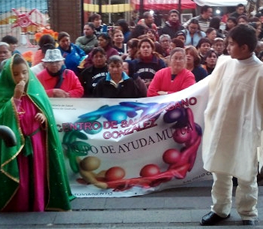 Winter has seemingly arrived here in Saltillo. Though I have yet to see any snowflakes or feel the ominous loss of control from black ice, I do see the denizens bundling up in winter jackets and scarves. The sun still shines but the stone homes here take on the chill of the earth below, especially when the sun goes down. While I often go to work in short sleeves, I have to pack a winter coat for the evening.

The cool air isn't the only Decemberick theme I'm seeing here from my home of origin. The holiday festivities have begun. I do miss the logging industry/Yuletide parade of my native pacific northwest, but I'm happy to bear witness to a new sort of tradition. 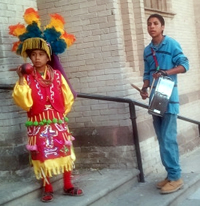 I first saw a particular phenomenon when I was coming home from a local gym and planning to stop off at a small kitchen just across the street from one of the major cathedrals centrally located in Saltillo. To my unpleasant surprise the street I used for that route was filled with temporary shops forming a bit of a farmers market-esque shopping area (something I now know is quite common for feasts). The foot traffic and bustling shop keepers allowed enough room for my car, though at a crawl of only a few miles per hour.

I came by the next day, this time on foot, in order to see in better detail what all the hustle and bustle was about. Behind me I heard the beat of drums, I watched dancers adorning garb reminiscent of traditional Native American festive apparel. These dancers are called Matachines. This is a sort of religious group that was first formed when the Spaniards introduced Christianity to the indigenous Americans in the late 15th century. Here in Saltillo they are the indios, or Indians, who observe Catholic traditions in a uniquely American way. In this procession there's a young girl being carried, dressed like the Christian icon and Catholic saint, the Virgin Mary. 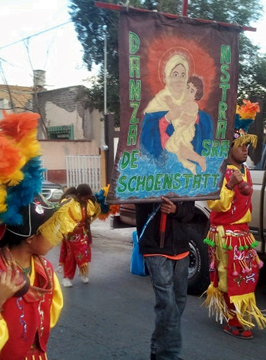 I went inside the cathedral, crossed my heart in respect of the customs, and took a seat in one of the pews. (This was actually the same church where I married my wife last June.) The priest gave his sermon in front of an image of the same virginal depiction I saw some of the parade marchers displaying.

My wife explained to me that this is just the beginning of the religious holiday of the Mexican Icon, Our Lady of Guadalupe, who is linked to the mother of Christ. It was 470 years ago today, according to the histories, that the indigenous peasant Juan Diego, had a divine vision of a young woman in the desert outside of Mexico City. And the girl told Diego her name was Coatlaxopeuh (Aztec name meaning she who crushes serpants, pronounced quatlachupe) which was interpreted by the Spanish clergy as Guadalupe.

Mexican Catholics often say that Guadalupe is just another word for the Virgin Mary. Being from the outside looking in I wanted to read what the internet had to say. During the Spanish conquest the priests had the Aztec buildings of worship destroyed, leveled even. In fact, the Aztecs had their own temple dedicated to their own blessed Virgin. After all, the Immaculate Conception is hardly original to Christianity. It's a theme that's been repeated throughout history and mythologies, including ancient Greek and Egyptian, not to mention the more modern Immaculate Conception from Star Wars: Episode I.

The unfortunate destruction of the Aztec mythos and culture seemingly left a void for the indigenous people. Today the Virgin Guadalupe's temple in Mexico City is probably the most pilgrimaged Christian site outside of Rome or Israel. Guadalupe is a very Mexican icon. The revolution plan of the early 20th century was called "Plan de Guadalupe" because she is a sovereign to Mexico's unique Catholicism.

The Feast for The Virgin Guadalupe isn't until the 12th of December. If you're in any town or city in Mexico you can expect to see some sort of celebration for her.