The Church of San Francisco - Not in California 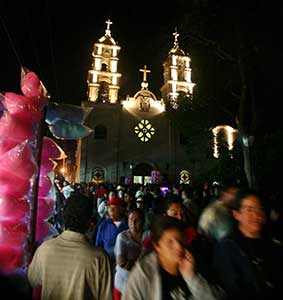 Just when I think I've seen all that my new home city has to offer, I am pleasantly surprised by something new. Its richness of culture and community events mean that not a week goes by without a market in the square including fair rides and other festivities.

This celebration in particular, which took place on October 4th just outside of our local Saltillo church, was to commemorate San Francisco, or St. Francis of Assisi. All I knew personally about him was that he was the namesake of the major west-coast city in California. I supected he also may have formed the Franciscan order of friars for the Catholic Church.

But as with most things, it's more complicated than that. Francis lived from 1181 to the evening of October 3, 1226 (the anniversary of his death is why this feast takes place on the 4th). He was from a wealthy merchant family and even fought as a soldier for his state. He eventually lost his taste for worldly life and became a pilgrim and beggar at St. Peter's Basilica, in Rome. I witnessed people still living as beggars outside the church when I vacationed in Rome. Eventually Francis returned to Assisi and began to teach on the street as an impoverished holy man. He amassed a following and his order was recognized by the Church.

Among some of his other famed traits were his attempt to convert the Sultan in Egypt to end the crusades. He arranged the first manger scene for Christmas. And he was the first saint to receive the wounds of the stigmata, an order of people who bear the wounds of Christ.

However, here in Saltillo he's more known for being the patron saint of animals. In this sense the Catholics in Mexico believe he watches over animals. Those who revere him may pray and ask him for a favor. If he fulfills the favor they will offer money or candles at his church. If they were praying for a person in particular they will put their photo at his altar. Many followers also buy statuettes of their patron saint and light candles and pray to give thanks and ask favors.

All this religious stuff isn't crammed down your throat in Mexico. People here just like to party. If you want to know the significance of something cultural you can just ask.

Another local cultural revelation I had was a street food known as camote. My wife spotted a silver-painted mobile furnace that housed this delicious sweet vegetable street delicacy. I later learned that camote is simply the local name for what we call the sweet potato or yam in the states. However, what sets this urban snack apart is how it's prepared. It is baked under fire much like foil-wrapped barbecued spuds. After grilling, it is split and mashed a bit, then topped with a caramelized milk sugar called cajeta. Cajeta is the same topping that gives the popular Mexican desert, flan, its coffee color.

Saintly feasts like this one for San Francisco is one of the many kinds of festivals that are celebrated in the central zones of Mexican cities and other catholic nations. If you're south of the border, don't forget to inquire locally if you want to take in some celebratory cultural experiences.