"Tread lightly Al, you’re on hallowed ground" was the genre of comments left by my friends and family after I updated my Facebook status, stating I was in Teotihuacan. The smiling faces of my wife and I, wrapped in our rain coats and hooded sweatshirts on a particularly chilly day--for what I expected to be a tropical destination. While it is well south of the Tropic of Cancer, Teotihuacan does sit at 7,500 feet above sea level. And, September is the rainiest time to be in Mexico. We were prepared for the weather. But many of the Northern European tourists I saw were sporting t-shirts, shorts and flip-flops. I suppose that for those who live further north, 60-degree Fahrenheit weather is on the warm side.

While I was visiting Mexico City for the mid-September independence celebration, a former colleague and fellow world traveler recommended I visit the ruins of Teotihuacan, as it is only a 45-minute bus-ride from the Federal District. Both my wife and I had only seen the lesser pyramids of the Maya, located within the Yucatan Peninsula, not far from the world-famous beach destination of Cancun. So we decided to go.

While in Mexico City, I was hoping to see some of the remaining buildings from Tenochtitlan—the Aztec capitol and center of wealth of the Aztec empire. But the Spanish Inquisition began ridding it of all pre-Hispanic religious icons when Cortez arrived (pre-1521). They smashed it all and built Catholic churches literally on top of the old Aztec gods' temples, calling the city New Spain. I suppose you could say they did that to convert the indigenous people, and keep the native economy and supply roads still flowing. There are no Aztec buildings in Mexico City.

However, by the time the Spanish came to Teotihuacan, it had since collapsed and lay in ruin, thus there was no reason to disassemble its great pyramids. Constructed sometime around 150 years before the Christian era, it was the greatest of the pre-Columbian cities in the Americas, and at its height reached a population of 150,000.

Seeing it up close was quite impressive: to take in the magnitude of what must have been required to accomplish the construction of the major buildings, especially the Pyramids of the Sun and the Moon. The Sun Pyramid is slightly larger, and has a base perimeter of 2,900 feet (more than half a mile to walk around) and the height is 233 feet. Lacking iron metallurgy or horse-drawn carriage, the temples are believed to be hand piled mounds that were finished with masonry and concrete. The stones used, upon closer inspection, are of a variety of color and texture: rocks burped up by a near-by volcano.

Getting to the site is cheap and simple. Once you’re in Mexico City, flag down one of the gold/maroon colored Taxis. They charge very reasonable rates. Tell the driver “Terminal Autobuses del Norte.” A one-way ticket for the 45-minute trip to Teotihuacan only costs 40 pesos (about $3 US).

Entrance into the park on Sundays is free for Mexican nationals. My wife convinced the door-man that I too was Mexican, and no questions were asked. It’s only about five dollars for foreigners. I’ve read of higher rates and expensive fees attached to camera usage, but I wouldn’t advise anyone into giving into those fees. If anyone asks for a fee of more than 60-odd pesos, turn around and try a different entrance.

Climbing the pyramids isn’t for the faint of heart. The architects made the steps quite steep, as if they were meant to be climbed with both your hands and feet. Hand-rails have been placed on the particularly perilous ascents. At the peak of the Pyramid of the Sun was a huddle of tourists trying to beat the wind and rain, as they soaked up the ancient magic of this City of the Gods. My wife and I didn’t linger; the pelting of the wind-driven raindrops kept most of the traffic moving. A French-speaking group was kind enough to offer to take our photo, with the Pyramid of the Moon behind us. While ascending the great edifice, we identified more than a handful of different languages from several continents. The majority of the visitors appeared to be Mexican nationals. The anthropological sites were marked with text descriptions written in English, Spanish and the Aztec Nahuatl, which is still spoken by many of the Indians of central Mexico. 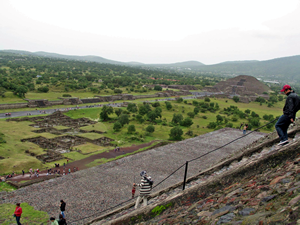 While touring the ruins, artisans/venders will happily sell hand-crafted masks, jewelry and other trinkets made from ceramics, silver, as well as volcano stone. The obsidian weapons are the same craft as the original pre-Hispanic arms smiths’ work. While I was touring, every minute or so my wife and I would be startled by the loud shriek of what sounded like a large cat. The sound didn’t actually come from a jaguar, but a 20-peso clay jaguar-caller. I tried it on my cat and dog when I got home; they too were as started as I was upon first hearing the call.

Outside of the ruins are shops that sell all the touristy stuff that the peddlers aggressively push on tourists throughout the park; you can save your money till the end. You’ll get better prices and won’t have to lug your souvenirs up and down the pyramids. Prices are very negotiable. The pueblo outside Teotihuacan has very inexpensive food, and includes the fermented cactus drink pulque which is very much worth tasting. The texture will surprise you.

Teotihuacan is definitely worth the trip if you’re in central Mexico. If you want to see a great triumph of ancient civilization these ruins are known as the most architecturally significant Mesoamerican pyramids built in the pre-Columbian Americas, and they’re just a short ride from the second most populated city in the world.