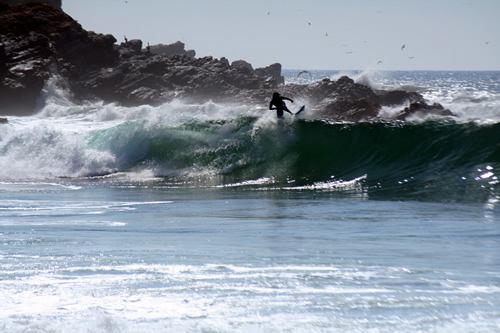 There are many great surfing spots located all along the Pacific coast of Baja California Sur. In this article, I will point out a number of surf destinations that are all typically a little harder to get to, which also typically means they are less crowded.

Southwest of the little town of Guerrero Negro you will find Bahía Tortugas and Isla Natvidad. Bahía Tortugas is nearly a 500 mile drive from the U.S. border crossing at Calexico, California. However, Isla Natvidad is a little tougher to get to. You can drive most of the way, but the primitive dirt road from Bahia Tortugas to Punta Eugenia will require a sturdy 4x4. At Punta Eugenia, you can hire a panga to carry you across to Isla Natvidad. For those wanting to avoid the rough road and the choppy panga ride, charter flights are available, but be forewarned that the dirt landing strip typically makes for a rather bumpy landing.

Bahía Asunción (Asuncion Bay) is ideal location for surfing, and is located approximately 465 miles from the international border crossing at Calexico, California. Right around Christmas time each year, and again in August, the local surf club organizes surf competitions; open to all ages, at Playa Los Choros. These family oriented events have been known to attract some world class Baja surfers.

Campo René is situated near the mangrove lined river mouth of the Eestero Coyote, which is situated inside the Bahia de Ballenas (Bay of the Whales). A variety of wave types can be found in the area and summertime typically offers the best conditions for surfing. Campo René is located a approximately 500 miles south of the U.S. border crossing at Calexico, California.

Punta Abreojos (Open Your Eyes Point) is situated at the mouth of the San Ignacio Lagoon. Besides being a great place to go fishing, Punta Abreojos is also home to an annual Ocean Festival and Surf Tournament that is typically held in September. Punta Abreojos is located a little over 500 miles south of the U.S. border crossing at Calexico, California.

The tiny fishing village of San Juanico is located on the Bahía San Juanico (San Juanico Bay). Bahía San Juanico, commonly referred to as Scorpion Bay by the surf community, is another of many famous, off-the-beaten-track southern Baja surf spots. Scorpion Bay is close to 570 miles south, and about a two day drive, from the international border crossing at Calexico, California.