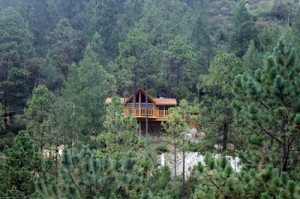 Mexico's summer climate wasn't exactly what I was looking forward to when I made the decision to live here permanently. The promise of daily highs in the 80s during the month of November: that's what drew me in. However, it's summer now and the heat isn't so much something to enjoy as it is more something you want to escape.

This is a big cultural difference between my native pacific northwest and my new high desert home here in Saltillo in northeastern Mexico. The stone homes here are warmed all day by the scorching sun, so much so, that people often spend the evenings talking and enjoying the cooler air outside until midnight. Meanwhile back home in the Pacific Time zone my folks are already asleep at 10 p.m.

Luckily it's not as warm here as say Monterrey, about 40 minutes away and more than 3,500 feet lower in elevation. Even so, it still gets into the high 90s on a regular basis in Saltillo. Fortunately the Sierra Madre Oriental mountain range gets higher and cooler. So cool, in fact, that I wouldn't know it was Mexico if I didn't know better. 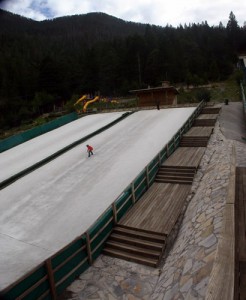 It snows in the city of San Antonio de Las Alazanas, and there is even a ski resort there. The city center is right around 7,500 feet elevation. As you drive there from Saltillo, the air temperature changes right along with the vegetation. Apple orchards surround the highway. You can stop at the town center on a Sunday and buy some of the local apple wine. It's sweet and strong, and there's no label on the bottle. To me that means it's authentic.

Keep driving into the mountains and there are no longer cacti. The prickly pear that is recognizable as the eagle's perch on the Mexican flag is nowhere to be found this high up. The air is so cool I wish that I had brought a jacket. Being uncomfortably cold at four in the afternoon isn't something most tourists would expect in any part of Mexico, especially not in the summer. Tall pines are the mainstay on the hills, decorated with multi-colored wild flowers and moss. The trees aren't quite as tall as we have back home, but I'm not complaining.

The pines are so common that they are integrated into the architecture. In most parts of this country cement is the primary ingredient in homes and other buildings. Log cabins are seated on the hillsides surrounding the Monterreal Ski Resort.

Located a few miles up from the town center of San Antonio, Monterreal is the only resort in Mexico to offer skiing year round. The snow isn't there year round, but the slopes have cloth netting for 365-day skiing, snow-boarding and sledding.

If you're in the mood to stay more than just an afternoon, the lodging at Monterreal is outdoorsy yet comfy. The cabins or cabañas are rustic and reminiscent of cottages I've seen in Big Sky, Montana, and I'd bet they are much more affordable to rent. A six-person lodge at Monterreal is spacious with a Jacuzzi and satellite TV, and you can expect to pay about $200 U.S. per night. The skiing goes for about 20 dollars an hour.

Whether you're in this area for a couple hours or a couple weeks, it's definitely worth it to see the piney mountains of San Antonio, and to treat your sweat-drenched physique to some moderate temperatures that are a rare delight at this latitude.