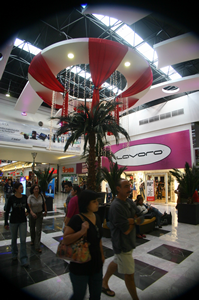 It’s no secret that Mexico relies heavily on the US, with about 80 percent of Mexican exports going north and nearly the same amount of importing coming from the States. It has even been a growing trend for middle-class Mexicans to travel up that way with passports in hand for Black Friday sales. However retailers here have made a great effort to bring the products and savings of America’s promotional post-Turkey-Day Friday to the growing consumer class of this, the world’s most populated Spanish speaking nation.

It started Saturday on the 17th of November and went until the national day-off Monday, El Buen Fin. El Buen Fin is the ‘good weekend’ that celebrates the Mexican revolution of the early 20th century, and had the 100th anniversary in 2010. It’s not to be compared to the American Revolution celebrated on the 4th of July, as that commemorates more the beginning of our independence from the British. (Mexico left Spanish rule in the early 19th century, and that was celebrated in September.)

One-hundred-and-two years ago was the beginning of the uprising. It was the working people against a national dictatorship that was backed by most land barons and the majority of state governors, save for a few. One of the pro-revolution governors was Venustiano Carranza of Coahuila (who is the namesake of Saltillo’s main avenue, as this city is the capital of Coahuila). Mitt Romeny’s father fled Mexico as a boy to escape the violence of this war. My layman political history suggests to me that the Marxist ideologies that flourished and took hold in the early 20th played a large role in this revolution, as it was a unification of the classes against the ideals of Social Darwinism that drove the 19th century industrial age.

In any case, this long national weekend is a perfect opportunity for the stimulation of domestic consumption. While carousing I noticed that the brands were from international designers that American and European shoppers like to buy, and the prices are comparable as well. It’s a surprise for the tourist in me to pay 40 US dollars for one shirt, since the prices of food and rent here are often one third of those I would expect to pay in the Seattle area. 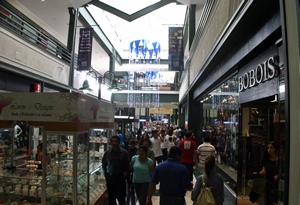 For my shopping I traveled northwest to Monterrey, the capitol of the state Nuevo Leon. While this city of more than one million inhabitants is a bit north of Saltillo, the elevation is several thousand feet lower than my mile-high home. With the heat index well into the 90s, I felt a bit out of sorts among the Christmas décor.

My destination was the Plaza Fiesta, an inner-city shopping mall to which Seattle’s Westlake Center can’t hold a candle. It wasn’t unlike any other Black-Friday shopping experience, save for the Latin vibe, the jarring humidity and a few other differences.

With friends I stopped at a mid-mall snackery, but it was no smoothie booth or pretzel vender, this little shop purveys Styrofoam cups, coming in three sizes, filled with freshly boiled kernels of corn. Locally called elote, the snack is topped with powdered cheddar and optional condiments include various spices and salsas that one finds throughout the country.

There were many elements to remind me of my North American holiday experience: children lined up to tell Santa what they want for a Feliz Navidad. I was especially happy to see a Starbucks, and though it was never my favorite bean roaster, the proud Seattlite in me smiled.

Mainly though, markdowns of 70 percent on clothing are reason enough to wade through the crowds, even if you’re like me and hate the rush of sales events. Luckily the Mexican crowds are a bit more tranquil; it seems they are less-seasoned shoppers than the infamous holiday rioting North Americans.

I wouldn’t be surprised if in future years we see American shoppers picking up some Spanish and a passport for the savings down Mexico a bit before Black Friday a week later.