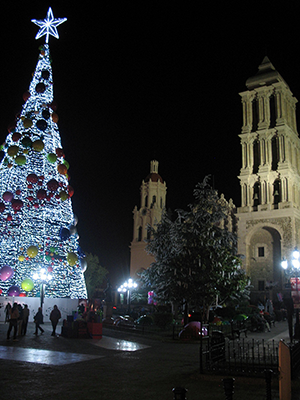 This is my second holiday season in Saltillo. There’s no place like home for the holidays. Home for me is the pacific northwestern United States, and Saltillo is definitely unlike it: however in many good ways. The first thing I notice is the weather. The high and low temperatures of Seattle during this time of year vary about 2 degrees centigrade, usually in the mid-30s Fahrenheit. Here in the high elevations of many of Mexico’s big cities the highs and lows vary by more like 20-degrees centigrade. Being often times in the 80s Fahrenheit during the sunny afternoon, and then dropping down to near freezing at night.

The palm trees persist even in the December chill of the holiday season. No snow has been in Saltillo for many years. However, the US and European tradition of synthetic snow has spread south of the border. In the central district of this Saltillo, during the Navidad time of year, the central plaza is decorated with whitened pines. A classic St. Nick with white beard and red suit sits in his throne to hear Christmas wishes and pose for parents with cameras.

Towering above Santa Clause, or Papa Noel as he is also called in Mexico, is a gargantuan synthetic conifer with blinking white lights. The constructed behemoth of holiday cheer challenges the central cathedral in height. This is especially interesting since in Saltillo no building can be higher than the principal cathedral. The Christmas tree was a tradition adopted by Victorian Britain from Germany. Since the Queen made it popular in photography, it spread quickly to the US and subsequently Latin America.

The decorated evergreen has been on a long ride through history and cultures, and I’m happy to say that it’s on full throttle here in Mexico. There’s not quite as much religious diversity in this part of the world. Most Mexicans are Catholic, and tend to apply their religion less to politics which makes for a totally different feeling. The government here is more promoting of culture instead of restricting, hence here you see the public spaces decked out with giant tree ornaments, and palm trees wrapped in holiday lighting. However, there’s not much of a share for holidays apart from Christmas. This is an overwhelmingly Christian/Catholic culture. As an agnostic I enjoy all sorts of religions and culture, and I’m not picky for one over another.

A Gallop poll that was recently publicized by the Associated Press stated that seven of the 10 happiest nations were in Latin America. From personal experience I can attest that this is especially true here during the holiday season. 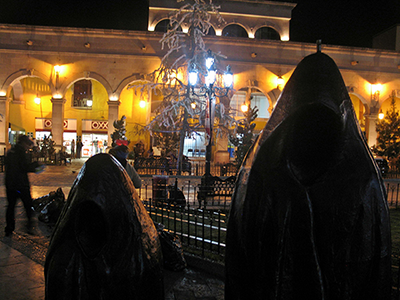 A special treat for people visiting the central district are a collection of bronze statues by British-born Mexican artist Leonora Carrington. She was born in 1917 in England but lived most of her life in Mexico City till she died in May of 2011. Along with creating bronze statues, she was a novelist and a surrealist painter in the same league as Salvador Dali. The bronze creations seem to very well compliment the holiday décor in a surrealish way.

If you’re like me and find yourself south of the border for the holidays, visit the central plaza of your nearest city and feel a bit of the world’s happiest Christmas cheer.