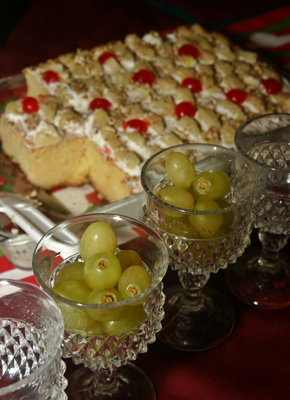 The New Year celebrations state-side seem to have changed a bit. With Dick Clark passed on and replaced by Ryan Seacrest, things don’t seem to be the same back home. Here in Mexico though, television icons seem to be less the centerpiece of ringing in 12 more months. Even fireworks play a very minimal role here in the north region of Mexico. The big pyrotechnic shows have eased so as not to spook people with explosions in regions with violence.

Here in Saltillo things have been relatively quiet. When the clock struck 12 Monday night there were some private fireworks displays, but no big shows in the central plaza. What is more important in this culture is what you do with your loved ones. Mexico has some very quaint but meaningful traditions to give good luck for the coming year.

The most common is the eating of 12 grapes upon the stroke of midnight; one grape for each month. Each person takes a glass with a dozen grapes or uvas, and eats them one by one, making a wish upon each grape. Usually the wishes are for health, happiness and prosperity in the coming year. 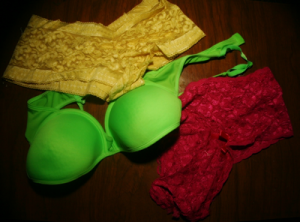 After asking about the grape tradition my family happily filled me in on other customs. While they seem quite superstitious, Mexico is an old nation with a great deal of culture, and these rituals are what make it unique and lovely.
One common practice, usually for young women, is to wear certain colored undergarments during the first days of the New Year. A person wishing to find love in the coming year will usually wear pink or red undergarments. More usually for a married woman wishing to gain monetary wealth will wear yellow or gold colored underwear and bra. Other localized traditions include other colors such as white for hope and peace, green for health and well-being, pink can also represent romance, and red can be for happiness and prosperity.

My parents in-law suggested my wife and I take our suitcases outside after midnight and walk around the block. It was a bit cold for this tradition here in Saltillo, but this little walk is to give you luck during the travels you may undergo during the next year.

Other things I’ve seen for New Years ablutions are altars with little offering bags: little lacy baggies with lentils, rice, beans, cinnamon sticks, coins and maybe photos of loved ones to hope for health and plenty for the next 12 months. The altars include candles that burn all night.

The money wishing doesn’t stop there. Several times I’ve seen currencies taped to doors; usually a 20 or 50 peso bill, or even just a couple pesos in coins, scotch-taped to the door. When I first saw this I thought perhaps it was to make donations to door-to-door carolers making their rounds, but it is just another convention that represents inviting money to come into the home.