Going Out to the Movies in Mexico 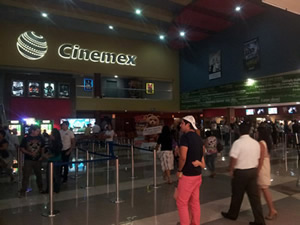 It’s no secret that the US produces the most popular films in the world—and we Americans love our movies. Checking out a flick at the local cinema is a truly American cultural experience. I would consider myself a bit of a stereotypical American cinephile. So much so that even while I’m on vacation in a foreign country I’m always keeping an eye out for a movie theater and the showtimes for new features.

Last year I was visiting Barcelona, Spain, as a tourist. All the movie theaters I saw had films from the US but they were all dubbed over in the Spanish language. A taxi driver told me there was one cinema that had films in the original language: one theatre in a city of 1.6 million. To me this is an insult to the film makers and film lovers alike.

Come out to the movies in Saltillo and I promise it’s a movie-lovers delight, and you can see the American features in the original English. The big difference I noticed when I first went to the movies in Mexico was the price. The low-end, small-biz theatre will seat you for 25 pesos, which is less than two US dollars. That’s admission to see the same movies that are showing in the US cinemas at 10 bucks a ticket. And you don’t have to endure Spanish voice-over if you don’t want to; all the theatres I’ve been to in Saltillo have American films in two versions: subtitled and dubbed. 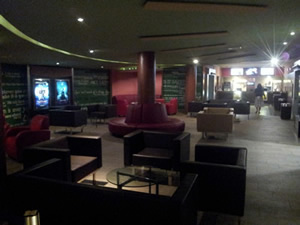 If you’re willing to pay more than the paltry two dollars, you can go to the Cinemex theatre at the Galerias mall in Saltillo. The regular seating is about $4 USD with digital projection, earth-shaking surround sound and 3D when available. Bump it up to six or seven bucks and you get VIP seating. This is truly a regal experience for movie goers.

The VIP option at Cinemex is unlike any movie experience I’ve had in the US. You choose your seating at the ticket counter. The clerk shows you a monitor that that displays what seats are available, sort of like an airplane. It’s a series of love-seats, two by two seating, that are separated by margins to allow for more privacy and romance. 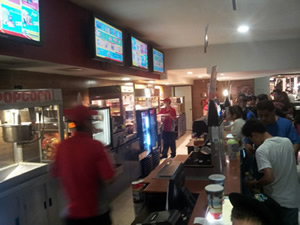 The VIP area has it’s own waiting room and concessions stand. Among the menu items which include the regular things like popcorn and hotdogs, you can order custom-made baguette sandwiches, and French-style crepes for four dollars that rival any I’ve eaten in Paris. When you enter the theater with your date, you find your leather love seat waiting for you. There’s an arm-rest in the middle that can be removed to allow for enhanced cuddling. The seats also recline with foot rests. I always order a ham and cheese crepe and a strawberry jam crepe. One of the concession kids brings the crepes fresh off the grill just after the previews.

There are a lot of things that make the movies in Mexico especially Mexican. People put ketchup and mayo on their popcorn. Root-beer is never on the soft-drink menu. And the release dates for new movies differ a bit. I did get to see “The Avengers” a week before my friends in the US. Despite these small differences, and watching the flicks with Spanish subtitles, I always feel like I’m getting a taste of home when I go to see the movies in Mexico.