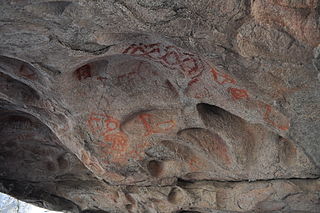 Imagine being able to glimpse into the past and get an exclusive first-person view of life and culture from 3,000 years ago. If you enjoy connecting with nature, culture and being a part of history, then perhaps you should venture into Tecate's El Vallecito caves.

The cave paintings of the El Vallecito area are a one-of-a-kind archaeological site consisting of 23 rock formations with paintings depicting the "La Rumorosa" style of cave art made by the ancient Yuman tribe which once inhabited the Baja California area up to the San Diego County area. The La Rumorosa style is characterized by "the presence of human figures with the fingers and/or toes represented, lizard forms, sunbursts, circles, and rectangular grids as defining elements" (Ken Hedges).

Purportedly, some of the paintings were created by shamans who were purportedly under the influence while they painted depictions of devils, suns and even sharks. These cave dwellings are thought to be where the natives hunted, ate, lived and performed fertility rituals.

El Vallecito translates to "Little Valley" in Spanish. In a single day you can do the one-mile hike witnessing many cave paintings, caves and rock formations in the small valley.

Make sure you don't miss the famous "El Diablito," which depicts a red man with horns. During the early mornings of the solstice, the sun's rays pass over the painting, making the eyes appear to be glowing. This is perhaps the most well-known cave painting in the archaeological site. Other paintings include "the rooted man" which depicts a man trapped by long tree roots as well as other mysterious symbols whose meaning is lost to time.

Other than the archeological site there is little to do in the El Vallecito area. Temperatures are usually high, so it is advisable to take water with you. No food or drinks are allowed in the park due to the delicate nature of the cave paintings. Be sure to drink plenty of water beforehand to prepare for the hike through the trails.

Whether you're looking to take your family to visit a piece of ancient Mexican history, or you simply want a place to enjoy a day of hiking through the beautiful Rumorosa area, the El Vallecito archaeological site is a must-stop. Don't miss a chance to explore and be a part of Mexican history.