Sometimes you need to Disconnect to Reconnect… 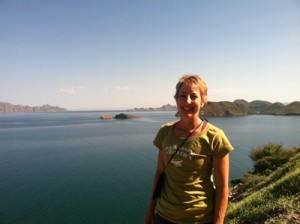 “Sometimes you need to Disconnect to Reconnect”...were the words spoken by our gracious host Sixto Navarro, General Manager of the Villa del Palmar Beach Resort and Spa in the small Baja California Sur (South) town of Loreto.

We had just gotten off a short, one-and-a-half hour plane ride from Los Angeles to Loreto. I had not realized how mountainous the Baja Peninsula was until I took this majestic ride along the Pacific coast and then across to the Sea of Cortez where the quaint village of Loreto sits on a National Marine Park, designated a World Heritage Site. 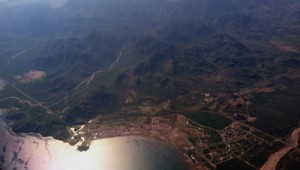 Jagged mountains rise above the sea and tower above the town. The flora was like a desert with hints of a rain forest. There were giant Saguaro-looking (from my home in Arizona) cacti with the skin of a succulent. Many organ-pipe looking cacti jutted out of the grassy dessert, which was quite green due to recent hurricanes that had hit the Cabo coast and moved over the mountains to Loreto. Bouganvilla, the fuchsia-colored vine that dons the entrances to so many homes in the Phoenix area, was a weed that brightened the desert all around us. Some trees resembled the Sonoran Palo Verde, but others could have been from Africa—-looking like a triangle sitting on its tip with leaves at the top and whitish bark. And then from the lush desert sprung the Sierra de la Gianta Mountains with sheer rock faces and deep canyons. I knew my photos would not be good, but I could not help but take photos from the tinted bus windows.

To the east was the Sea of Cortez—sheer blue seas with several islands. The five main islands, Isla Coronado, Isla del Carmen, Isla Danzante, Isla Santa Catalina and Isla Monserrat are part of a National Park that houses more than 50 miles long and 25 miles wide. It was magnificent set against the green desert and mountains. 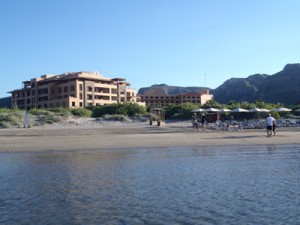 We soon found ourselves at the lovely Villa del Palmar, a large resort nestled between mountains and beach on the small Danzante Bay, directly across from Danzante Island. Tiled murals of the sea and town filled two walls of the lobby where I drifted into a vacationer’s trance due to a smell that filled the room. I would later learn this is a secret essence whose formula is only known by hotel manager, Sixto Navarro. It is his special fragrance for the hotel, but I surmised later that it is from a local tree that was pointed out by one of our guides who works at the hotel. 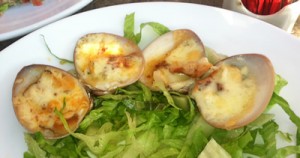 We were greeted with fancy, colorful drinks, a special hand cleansing and then a delightful lunch—with the warning to not fill up, since dinner was soon and it was going to be grand. Some of the hotel’s specials, which we delighted in for lunch, include the sea bass ceviche, shrimp and steak tacos, wood-fired pizza, pico de gallo and guacamole. But the specialty for Loreto is the chocolate clams—which are named not for how they are cooked, but for their color. The chocolate clams, cooked in chipotle and cheese, were definitely the highlight of the lunch menu (though the ceviche was a close second).

I remember how excited I was to spend time at the beach when I was a kid and my father took me south of the border to places like Rocky Point and Kino Bay. I could never get enough and inevitably spent every minute on the beach. That was before sunscreen was popular and I ended up spread out on the bed for sleeping because every inch of my body was burnt to a crisp.

I was feeling the same excitement here, so as soon as everyone headed to their rooms for some pre-dinner relaxation – I headed to the beach for exploration. First, I waded out into the water, shuffling my feet due to the sting ray warning signs – though I did not see a single ray during my entire stay. The sand was soft, like a fleece blanket and my feet delighted in wiggling deep in the sand and shuffling ever further away from the beach. There were sailboats anchored in the bay and I felt very close to them, as I turned around to see the beach and hotel far off in the distance, but the water was only chest deep. The water was clear and blue like mouthwash. I could see every groove carved through the sand by the tides of the Sea of Cortez. 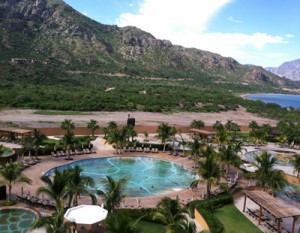 Upon returning to shore I chose to traverse the rocky outskirts of the bay looking for sea creatures and rock formations. Many tiny crabs darted from the shore as I made my way around the bay. I saw a large osprey perching on one of the giant Saguaro-looking cacti. In the bay were tiny bright purple fish that swam along small splotches of red coral. The rock was volcanic and you could see where it had flowed into the ocean creating cracks and raised areas.

Heading back to the hotel I decided I should swim in the large turtle-shaped pool. I had it all to myself…as I swam lap after lap after lap looking at the beautiful flowers and trees that surrounded the pool, enjoying the warm air, the great blue sky, the towering rock faces and lovely balconies overlooking the pool—and endless quiet

Sixto said, “Sometimes you need to disconnect to reconnect.” He wasn’t talking about the Internet or phones, since they were all available there. He was talking about the quiet, solitude of the Villa del Palmar. And I was already feeling the effects of this serene local.

Stay tuned as I continue with my story of Loreto and Villa del Palmar...