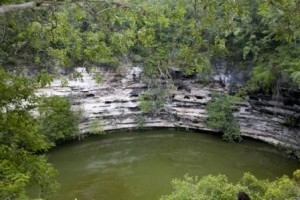 For thousands of years, onlookers have gathered in the center of Mexico’s Yucatan region, at Chichen Itza, to celebrate the spring and fall equinoxes. Chichen means "at the mouth of the great well," and the Itza, are the Mayan people who have long inhabited the region stretching from the northern Yucatan Peninsula in Mexico, to the Petén Department in Guatemala. The “great well” reference comes from the Cenote Sagrado (“Sacred Sinkhole”) which is located at the site. Chichen Itza was an important ceremonial hub for the Mayans, and it was also one of the largest cities of their vast empire.

The main focal point, of the city ruins at Chichen Itza, is the Temple of Kukulcan, who was the feathered snake deity of the ancient Mayans. The Temple of Kukulcan, often referred to as El Castillo (“The Castle”), has a pair of plumed serpent god sculptures integrated into the balustrades running along the staircase on its northern side. The Mayans built many awe inspiring pyramids throughout their vast empire.  Amazingly their advanced architecture was often precisely aligned with the annual solar calendar.

Journey of the shadow serpent 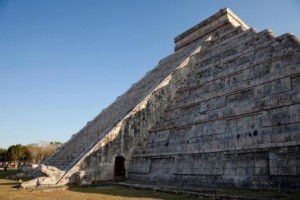 During both the spring and fall equinoxes, when the sun’s orbit passes directly over the earth’s equator, the rays of the sun cast a shadow, of the northeast corner of the stepped pyramid, across its northern face, and put on a show at the Temple of Kukulcan. The pyramid was built in perfect alignment with the annual path of the sun, so that during an equinox event, the shadows cause an optical effect that remarkably, makes the serpent sculpture appear to be undulating and slithering down the side of the pyramid.

A spiritual event and celebration

The best dates to witness the shadow serpent, making its autumnal equinox journey, will be from about the 18th of September through the 24th of September. During these dates each year, thousands of visitors flock to the site to see Kukulcan descending the pyramid at Chichen Itza. Many spectators attend to pray and meditate during the spiritual event, while others make the pilgrimage to play music and dance in celebration of the changing of seasons. As Kukulcan descends from the pyramid, down to the earth below, it will also mark the beginning of the fall harvest.