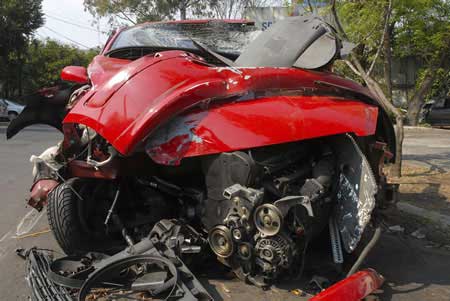 The US has a pretty advanced insurance system. Insurance companies in the US sponsor sporting events, television shows, podcasts, and so much more. For many, the cost of insurance is well, a pain. It's required by the government, costs more than we think it should, and seems to never end. Then when we do have a claim, it takes longer than it should to get us paid, and involves entirely too many lawyers.

But auto insurance is important, really important, and is seriously lacking in Mexico. Only 27% of cars are insured in Mexico. In comparison 85% or so of US drivers carry auto insurance. That's incredible. However, recently Mexico has begun implementing new "compulsory insurance laws" in an attempt to get more drivers on the road to purchase insurance.

There are many in the US that disagree with mandatory insurance laws, pointing out that it puts an undue burden on the poor. In looking at Mexico's new law they clearly considered that in at least two ways. First, their implementation schedule imposes the law on newer vehicles. Secondarily, the vehicle must reach a minimum value before insurance is required. So it won't actually be until 2019 that all years of vehicles, at any value, will be required to have insurance; a pretty long implementation schedule.

The argument for mandatory insurance is simple and something that we at Mexpro support.

Let's look at the facts for a minute. A car is typically one of the greatest assets that someone owns. Yes, houses, savings/investments, then somewhere you start to see cars creep into the mix, they are expensive items. Then throw into the fact that most vehicles weigh several thousand pounds, and are capable of traveling at speeds in excess of 100 miles per hour. When we get behind a car, we are climbing into a missile. Bottom line is they can create a lot of damage and injury even at slow speeds.

So without insurance there is a risk of non-payment. Think of the medical bills or even the value of vehicles these days. That is a lot of money to pay out of pocket. Personal responsibility laws are inadequate. If you don't have insurance, and don't have cash, how do you plan to pay for the damage? Truth is, you probably can't. So when it comes down to it the best option, it is to force drivers to have insurance; hence Mexico's new laws.

If you are still not convinced, consider this:

27% of the cars in Mexico have insurance, 73% don't. That means that most of the families of these injured parties received nothing for funeral and medical expenses. Not to mention the untold number of cars that went unrepaired and investment in cars lost.

Insurance is important. It protects our investments, our future earnings, and our assets when we are in at-fault accidents. That's why we at Mexpro support Mexico's new mandatory insurance laws, and are glad to provide insurance coverage that meets these new requirements.