At Mexpro we greatly enjoy the blog posts by our Mexico correspondent, Al Barrus. Out of our own curiosity, we asked him to write more about his story. This post is a heartwarming story about a very interesting and accomplished man who "struck it rich" in Mexico. We hope you will enjoy Al's personal story as well as his other blog posts. 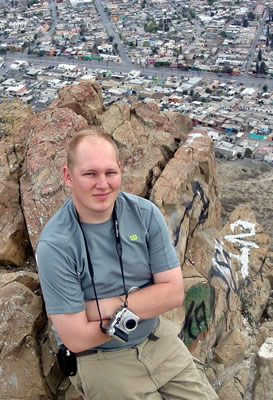 The 14th of October was the first anniversary of my new life here in Mexico. The build up to my move was full of questions. "Why Mexico?" people would ask, with a hint of condescension in their voice. Back then the answer was more complicated: I mostly sought adventure. But why do I choose to stay here? Because I'm needed here.

I suppose you could say my taste for getting up and going to a new place took root when I was 18. As I was preparing for my high school graduation in 2002 in Shelton, Washington, the U.S. had troops on the ground in Afghanistan. I knew that this would be a big event for my generation, so I enlisted into the Washington Army National Guard.

I didn't really have much else going on. I enjoyed computers so I thought maybe with the GI Bill I could study to be a network engineer or something computer-techy. However, my real dream was to be a writer and English teacher. During the recruitment process I hit a stroke of luck; a training slot had opened for a print and photo journalist, so that would be my specialty rather than a combat arms trade.

I went through the training: nine weeks of basic soldiering, and 13 weeks of a news writing and photography. The Iraq war started just before I graduated from military journalism school. I didn't see that coming.

After my training I returned to Washington and studied computer science at a community college. My unit, the 122nd Mobil Public Affairs Detachment was sent to Baghdad to support the 1st Cavalry Division during the second year of the Iraq War, or Operation Iraqi Freedom II as it was named.

I really enjoyed my work in the war. I had a great amount of freedom for a lower enlisted soldier, living at different locations like an embedded reporter within various units, emailing my work to my superiors at the division hub. I wrote over a hundred stories, took thousands of photos, I met celebrities, I reported on the insurrection of Fallujah in November of 2004. I saw some things that I would never forget, and some things I would want to forget later on. 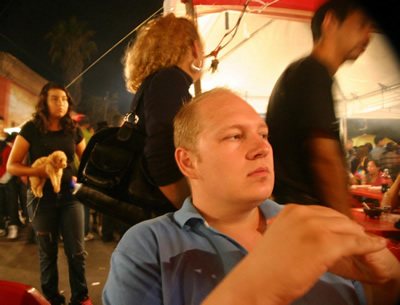 When I returned to Washington in 2005 I moved to Seattle to try out the city life. I went back to studying computer science. The technology had changed so much in just a year I felt like my previous credits and tuition were wasted. I fell into a depression and dropped out of school. I tried working several different jobs. Nothing seemed to fit.

In 2007 I left my military obligations, and I had a sort of awakening and enrolled at The Evergreen State College in Olympia, Washington. It wasn't easy, but after four years I became the first in my family to earn a bachelors degree.

For spring break in 2010 I went with my step father to visit his old home in Mexico. He's an immigrant from Mexico, and lived in Saltillo until he was 30. I went for the 400-dollar Lasik surgery, but I immediately fell in love with the culture. I saw how much more people in Mexico enjoyed the company of others and their relationships. Whereas in the U.S. people were more connected to their devices and technology. I wanted to return to do a study-abroad program.

I applied to study in Mexico, but the State Department put out a travel warning, and my college wouldn't endorse a study-abroad contract. However, in December of 2010, everything changed for me. Years before I had applied for veterans disability for post-traumatic stress disorder, after my therapist had advised me to do so. Suddenly, I was awarded a monthly disability payment. It wasn't a lot, but I knew it was enough to allow me to live abroad in a poorer country without having to work for a living.

During college I was a veterans work-study at a state employment office. I helped other veterans find high paying government jobs during the darkest months of the recession. However, I never managed to find anything for myself.

Like many recent college grads, I was unemployed and paying off student loans. After six-months of eating into my savings, I decided to put my money where my mouth was and head south. I had arranged housing with some family I knew through my step-father.

People called me crazy. They said that Mexico was too dangerous for a gringo. I knew the risks, and I also knew from my own experience in combat zones that they always seem more dangerous from the outside looking in. My military experience had prepared me for the travel, to be calm in dangerous areas, and I had the means to get by. My college education taught me to treasure other cultures, to have patience and to observe, to study and to learn. It also gave me the credentials to teach English.

In November of 2011, a month after I had crossed the border, I met the woman who I would marry. I found love here. Much of the anxiety and depression I suffered after coming home from Iraq has been alleviated by the warmth of the souls in this different culture.

But more importantly, I feel needed and appreciated here. There's a high demand for native English speakers in Mexico. I stick out like a sore thumb in most places here, because of my northern European heritage, but that's part of what makes life interesting.