Understanding the US State Department Travel Warnings for Mexico

I moved to Mexico in 2011, and I’ll mark my two-year anniversary as an expat in October this year. However, Mexico isn’t the only other country I’ve lived in.

As far as dangerous countries go, I think I’ve been to the worst one during what was one of the worst times to go in recent history. I was in Baghdad from 2004-2005 when I was only 20 and 21 years old. The violence spiked more up until 2008 when things started to cool down. However, Iraq does continue to be one of the dodgiest countries on the map. And therefore, I can speak with a bit of experience on what it means to live in a militarized zone.

When I was a young journalist/soldier going into Iraq, things were scary at first because I was taught that I should be scared—it was Iraq after all. My first car bomb came and went, and I endured my first mortar attack. I soon realized that there’s no reason in getting all worked up over something that I couldn’t control. People who had been there longer than I could tell I was new to combat by the way I acted when I first heard explosions. Eventually I could tell when someone was a newbie, and I kept cool while I watched them freak out. So when I came to Mexico I realized it might be similar. Countries outside of the US and Europe seem a lot more chaotic and chancy to people on the outside looking in. And that goes for Mexico. For example, the travel warning that was released on July 12 says that the border state and city where I live (Saltillo, Coahuila) should be avoided if at all possible. However my wife and her family tell me that we should avoid going to Baja California, because it’s much more unsafe. However the travel warning actually lists Coahuila as being more risky than Baja California Norte.

Getting down to brass tacks--I’ve been living in Mexico for almost two years and I’ve never had a real problem with the police or the narcotics traffickers. I’m a cautious person. I know the language and the culture. I don’t ride around in a fancy new SUV, and I don’t drive around very much after dark, which even the Mexicans avoid. According to the US State Department’s travel warning, I shouldn’t even travel to the place where I live.

Here’s a list of things keep you safe while enjoying parts of Mexico that have been deemed too perilous to visit. 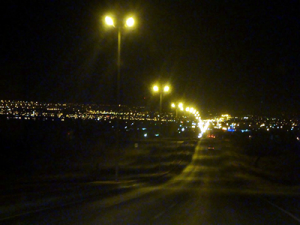 Don’t Drive Late At Night: While this is perfectly fine to do in the US, everyone in Mexico tells me to get off the roads by nightfall, and especially get home before midnight.

Don’t Drive a Fancy Car: The car jackings that have been made so famous are usually perpetrated by the traffickers looking for a new ride. Their favorites are dark-colored, late model SUVs, especially if the windows are tinted. Don’t wear fancy clothing either. Generally speaking the more working-class and regular old low-mid income you look, the less likely you are to get robbed. I drive a 2001 Jetta, and I like to dress like a college hippy.

Learn Some Spanish: Being able to communicate and knowing what people are saying is half the battle. Hearing what a police officer or soldier is saying to you can save you from making bad decisions. Even a little bit of Spanish can go far and at least give you a base to learn more.

Comply With Authorities at Checkpoints: I can’t tell you how many times I saw civilians in Iraq run through checkpoints without stopping, and then had their day ruined. Soldiers are supposed to fire if you don’t stop, so just stay alert when you see soldiers and stay communicative with them. Soldiers are usually quite friendly and they are less corruptible than the police.

According to the travel warning, sometimes criminals set up these barriers and masquerade as soldiers. If you get robbed, comply with the criminals. They don’t usually hurt people who comply with their commands. If you resist their demands, you can count on them being prepared to kill: they are desperate people.

Don’t Transport Any Contraband: This is an area that many gringos get wrong. While there is a federal law in Mexico that allows anyone to have a small amount of illicit drugs for personal use, don’t do that. The soldiers and police often have drug-sniffing dogs and if the canine starts to sniff at you, then you will be treated like any other drug trafficker.

Don’t get me wrong with the above advice. Many parts of the Mexican Republic are plenty safe and have many tourists doing touristy stuff. When I visited Puebla in central Mexico I rarely saw soldiers patrolling, and I saw many American and European tourists.

If you’re like me and you don’t mind a bit of danger and militarized situations, then by all means you can ignore the travel warning. Just be sure to take the proper precautions.