The Tradition of the Carne Asada 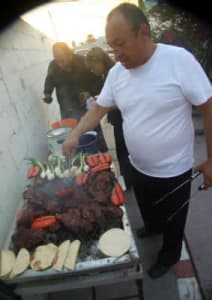 Now that the weather is warming up all over the northern hemisphere, more and more people are taking advantage of the amiable conditions to cook outside. In my family, outdoor cooking has traditionally been done by my step-dad. Barbecues in my native Pacific Northwest can usually only happen between May and September because the rain will wreck that sort of event really quick.

Here in the northern part of Mexico we cook outside almost year round, and we don't call it a barbecue, we call it a "Carne Asada." There's a lot of confusion around this term on both sides of the border and both languages. The authentic Mexican restaurants of the northern U.S. call their signature steak "carne asada." Thus, when I came to Mexico and I was asked what kind of tacos I wanted, I told the waiter "carne asada" and he suggested that what I meant was "bisteck" which I guess translates to "beef steak" here in the north of Mexico.

Adding more confusion to the term, Mexicans have a traditional way of boiling meat with agave leaves, and that's called "barbacoa" and it sounds like "barbecue" but they are two very different methods of preparing meat. If we literally translate "carne asada" it comes out to "grilled meat."

In the north of Mexico cooking carne asada is a good excuse for a social gathering, like when someone has a barbecue in the U.S. It's not just about the beef, however that part it is quite delicious. 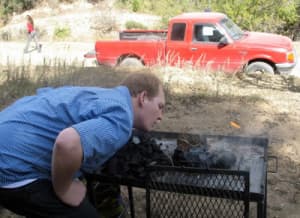 The barbecue and the carne asada vary by many degrees. Many outdoor cooks take pride in the type of fire they use to prepare their food. I very much enjoy the fire preparation part, and that goes back to my days as a boy scout. In the states we often take a bag of briquettes, slather it in lighter fluid and let a match down and it's ready to go. The carne asada fire, in my experience, requires a bit more patience and yields a tastier feast.

If there are mesquite trees in your area, this is the best way to go for flavor. However, I live in the city so I buy a bag or two of "carbon de mesquite." The carbon is mesquite wood branches that have been compressed and charred. It takes quite a while to get this carbon going and it seems everyone has their own method of nursing the fire.

To get the carne fire going, me and my wife will take a paper towel and soak it in cooking oil, then surround it with the carbonized mesquite on the grill, ignite the oiled paper and apply air for an hour or more. If you're in the city you can use a box fan and that will get it nice and hot in no time. If you're out in the country you will need to use a hand fan or good old fashion lung power.

Once the fire is nice and hot, it's time to put the grill down and clean it with an onion. That's done by hand shredding a big white onion across the surface of the grill. I'm not sure why we do this but I think it adds flavor.

The first thing to cook is the salchichas (or sausages), which are these fat red-orange hot-dogs that I have never seen in the U.S. They cook fast and drip oil into the fire which makes it nice and hot for the steaks that come later. The sausages also help to alleviate hunger while people wait for the other foods.

A tasty carne asada treat is also a grilled with leek onion prepared with lime juice. It's also a delicious idea to prepare some potatoes with butter, cheese or whatever, then wrap them in foil and let them bake next to the coals under grill.

If you're in north Mexico there are many restaurants that have the carne asada theme. It's delicious but I wouldn't recommend it for vegetarians; I'm afraid there's not a lot for you to eat at these events.