In Mexico: Swim with the Whale Sharks 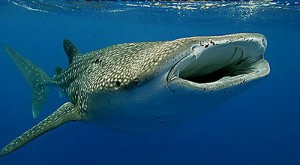 ISLA MUJERES, Mexico — "There's a limited number of people who'd want to jump into open water with a giant fish," local resident Brian Prince is saying from his spot on the patio of a B&B on this island off the coast of Cancun.

He has a point, but it's clearly lost on the people convening at the dockside Bally Hoo restaurant several blocks away. The early morning haze is burning off the horizon, and the wet-blanket humidity already has descended as the guides and boat captains finish their coffee and saunter down the dock to corral passengers into a collection of small, open boats.

The pursuit? Whale sharks, the biggest fish in the sea at 6 feet to 50 feet and possibly longer.

The destination? At this point, nobody's exactly certain.

But some tour operators who work these waters are so confident they'll encounter the behemoth that they'll take customers out again free if the sharks fail to show.

Still, probably the most salient whale shark fact — at least to those hoping to get up close and personal with them — is that they aren't meat (or man) eaters. Instead, they use their gaping, cave-like maws to suck up plankton and fish spawn, like giant industrial vacuum cleaners.

From mid-May to mid-September, the waters around Isla Mujeres play host to hundreds of migrating whale sharks. The fish can be found elsewhere (from Honduras to Australia to Mozambique), but nowhere are they reported in greater concentrations than in Caribbean and Gulf of Mexico waters off the northeast corner of the Yucatán Peninsula. In August, researchers counted 420 whale sharks in one area, says Rafael de la Parra of the Domino Project (named for the sharks' speckled markings), which tags the fish and monitors their movements.

But the 100 or so licensed whale shark tour operators working these waters seem to have a pretty good idea.

At the dock, passengers climb aboard the screaming-yellow Ceviche II, operated by Ceviche Tours, and settle into facing bench seats. The boat holds 10 comfortably — the maximum allowed on each boat for these outings. It's an international group — from Finland, Australia, England and the USA — and a rather subdued one, too. Maybe that's because they're straining to remain steady as Ceviche II races for open water, its bow smacking hard against swells that glisten like steel in the morning sun. One of the Australians is visibly seasick, stumbling to the back of the boat to lean over the side. The others avoid eye contact, lest the same sorry fate befall them.

An hour or so later, the captain kills the engine, joining other boats. And suddenly it appears: a triangle of a fin and then a tip of a tail breaking the surface. The first two swimmers hustle into their fins and masks and jump overboard with guide Jesus Aguirre, who advises staying as close to the fish's head and mouth as possible for the optimal experience. Gliding side by side, close enough to get thwacked by the shark's massive tail, if it were so inclined, is exhilarating.

But is it a good idea?

If whale sharks are the double tractor-trailers of the underwater highways, human interlopers are puny Smart Cars, utterly insignificant in the presence of such overwhelming mass.

But swimming eye-to-eye with the creature, struggling — and failing — to keep pace (this species can swim 100 miles a day, if need be), there's time to ponder what might be rattling around in that massive head.

Probably very little, as sharks aren't the brightest bulbs in the sea, says Naomi Rose, a marine mammal scientist with the Humane Society International. "We don't know enough about whale sharks to (know) the effects of a bunch of people swimming around them," she says. "But my guess from a basic biology point of view is that having another animal buzzing around would be at least annoying and quite possibly harmful. If we're disrupting foraging or mating behavior by barging into their living room and insisting on playing with them, it becomes a welfare and conservation concern."

(The Gulf of Mexico oil spill hasn't affected Mexican waters, but its effect on the broader whale shark population is still unknown. "It's a single sea with mixing currents," de la Parra says. "What's happening to the plankton up there will affect us sooner or later.")

Formal whale shark tours began on Isla Mujeres only about five years ago as local fishermen looked for alternate revenue sources. Tours already had been operating from tiny Holbox Island off the northern tip of the peninsula, but getting there from the tourist hubs of Cancun and the Mayan Riviera required an hour-long journey. Isla Mujeres, a laid-back island of 17,000 only a 20-minute ferry ride from downtown Cancun, has seen some tourist uptick, thanks to the shark swims. But most tour-goers sail directly from the mainland, and the island remains relatively low-key.

An astonishing amount of respect

The tour operators have devised their own code of conduct. It limits boat size and allows only two swimmers in the water at a time and a maximum of 30 minutes per boat with any individual shark. Additionally, Mexico created a Whale Shark Biosphere Reserve in the region last year.

But restrictions are effective only if they're heeded, de la Parra notes. At a whale shark conference in 2008, attendees "were astonished by the respect (Mexican) operators have for the whale sharks," he says. As pressure increases to deliver a guaranteed swim-with-the-sharks experience, however, violations to the code occur, he says.

"When there are plenty of whale sharks around, everyone's behaving and everyone is happy," he says. "The problem is when there aren't a lot of sharks. Last week, there were 20 animals and 40 boats."

Fortunately for those aboard Ceviche II — on this day, anyway — the sharks are abundant. Domino Project workers doing an aerial tally spot about 75.

Two by two, the swimmers take their turns with the creatures, muffled squeals of pure exhilaration emanating through their snorkels. And then, just as suddenly as it began, it's over. The crew beckons the last snorkelers back to the boat, and by 11 a.m., they're bouncing back toward the island.

"It was good day," Aguirre says.

"Who knows?" he says with a shrug. "Every day's an adventure."