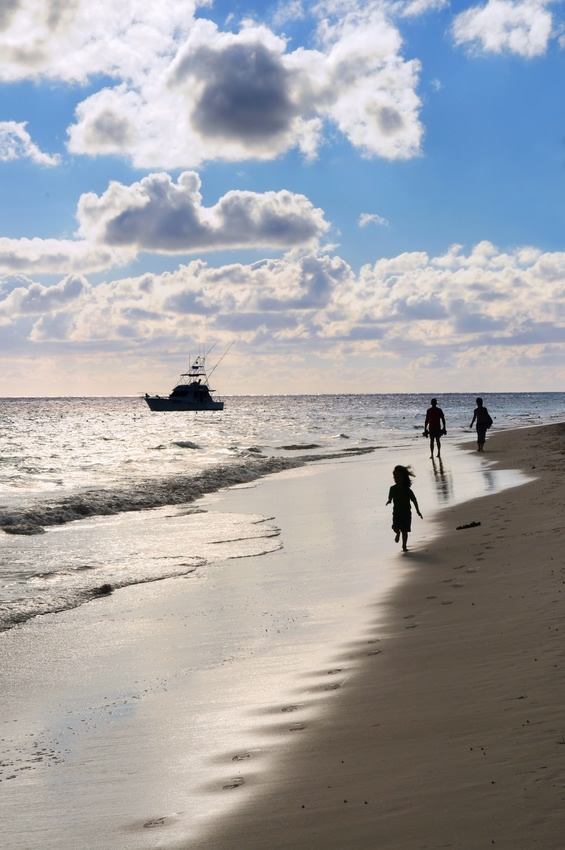 "My American friends say, 'You're going to Mexico? Aren't you scared?' " Smith says. "No, I'm not afraid at all. Of course, they have crime down here, but it's nothing like home. I'd be more scared in Phoenix."

ROCKY POINT, Sonora - It's midafternoon on the beach. A lone sunbather shimmers in the distant expanse of white sand.

Pelicans glide over the sparkling Gulf of California, lifting and diving in a light breeze.

No cartel assassins are shooting it out.

The sunbather, Beth Smith of Payson, awakens with a start. "Oh, no," she says, touching her sunburned face. "It's just so peaceful here, I fell asleep. And now, I'm going to be fried."

Such is the plight of tourism in Puerto Penasco, a Mexican town better known in Arizona as Rocky Point and long regarded as Arizona's beachfront.

Amid an economic recession and drug wars in Sonora, U.S. visitors, once the town's economic lifeblood, are staying away in record numbers. Since 2008, when 2.4 million people swarmed here, the Rocky Point tourism office reports a 50 percent drop in visitors.

Americans who live and work here seem bewildered by the loss of allure for a town that remains a gem by the sea.

Even as students from Arizona's universities set out next week for their annual spring-break revelry, hotels and restaurants are nearly empty. Tour guides and souvenir vendors have low expectations, knowing that school officials and the U.S. State Department recently issued travel warnings.

To American expatriates who know and love Rocky Point, the warnings are ridiculous, the fears absurd. The real danger here, they insist, is a sunburn. Or a hangover.

On the beach, Smith says she enjoys the solitude that has made Rocky Point feel like the sleepy little fishing village of yore, but she sympathizes with poor Mexican neighbors trying to make a living.

"My American friends say, 'You're going to Mexico? Aren't you scared?' " Smith says. "No, I'm not afraid at all. Of course, they have crime down here, but it's nothing like home. I'd be more scared in Phoenix."

Early visitors made a difficult journey to catch giant groupers and dine on jumbo shrimp.

As roads and services improved, families and spring-breakers joined the migration. By the new millennium, Rocky Point was a boomtown. High-rises sprouted on the beach with million-dollar condo units. Construction started on a commercial airport. A new highway was built. Plans were hatched to lure cruise liners.

Then, the U.S. economy flopped, a swine-flu epidemic struck and drug violence erupted among Mexico's warring cartels in Sonora. It was the perfect storm, a curse on a Mexican town that relies so heavily on tourist money that shops advertise in English and deal in dollars.

Although a few narcotics traffickers have been killed here in the past year, Rosie Glover, publisher of Rocky Point News Online, says not one American has been murdered here in at least five years.

Glover works as a volunteer with Rocky Point's Tourism and Visitor Assistance Office, a non-profit group founded by local businesses to establish a 24-hour hotline for Americans who need help or advice. Glover recently visited Arizona college campuses to convince students that Rocky Point is safer than Arizona.

"Crime in the States is more random," she says. "In Mexico, bad things happen in bad places, usually to bad people."

At Black Dog Saloon, an American hangout, owner Vickie Emrick says business has dropped 70 percent, and news reports of 6,587 drug murders in Mexico during 2009 are partly to blame. "People who come here more than three times a year know there is no real fear," she says, "but the media have almost destroyed Rocky Point."

Emrick admits ambivalence. She moved from Clifton two decades ago for the tranquillity and enjoys having beaches and roads almost to herself. "It truly is a life in paradise," she says.

Liane Armstrong, who provides real-estate and other services to Americans, says she retreated to Rocky Point after her Phoenix investment business was destroyed years ago by the collapse of an international telecommunications corporation.

Rocky Point claims a population of about 50,000, but there is no official tally of full-time English-speaking residents - a colorful assortment of retirees, entrepreneurs, beach bums and others.

Russ Black, a tour operator, estimates that 2,000 Americans spend most of the year here. Emrick puts the number closer to 6,000. Americans have created dozens of charitable groups to build homes, provide scholarships, gather food and collect clothes for the poor. There are two English-language newspapers, plus a thriving gossip mill.

Black, the town's unofficial ambassador and unabashed promoter, visits travel expositions throughout the Southwest, extolling the beauty - and safety - of Puerto Penasco.

"This is just a little drinking village with a fishing problem," he jokes, driving through town. "I love the place. There's so much to see. And there are so many beautiful people who don't deserve what's going on."

Black wears a shirt that says, "I make stuff up." He hands out brochures that refer to him as "Anything-for-a-buck Russ." He directs visitors to restaurants, helps them shop for souvenirs and warns that some seafood vendors may use bogus scales to weigh the shrimp. He even offers a "taco-stand hopping" experience where tourists can enjoy "real street food."

Black, his wife and 15-year-old son have been here nine years. They are so immersed in Rocky Point that they live in a Mexican neighborhood rather than in one of the American colonies.

Like other Americans here, Black complains that the town has been a victim of phony phobia. The few murders that do occur have a "cleansing effect," he argues, eliminating criminal outsiders. Besides, Tucson is closer than Rocky Point to most of Sonora's drug violence.

"I don't believe the United States is the only First World place where you can live safely," Black says. "The lack of confidence that some people have is really a lack of experience."

Finishing up a tour, he offers a souvenir license plate to his customer. The message: "I survived Mexico . . . and I'll be back!"

Martin Hernandez Saldiva stands on the sidewalk outside his souvenir shop, looking up and down a boulevard where vendors outnumber potential customers.

"I can go two or three days without selling a single thing," he says. "Look, there are only three cars on the road. . . . I read in the newspaper that spring break is now. But not here."

Across the street, an incongruous sign advertises "Red and Terri's Puppy Rescue Inc." The place is a kennel for strays and home for a couple of American strays from California.

Terri Fielding says she and her husband, Red, got sidetracked during a Mexican vacation two years ago and wound up starting a new life in Rocky Point.

The Fieldings began taking in dogs, cleaning and vaccinating them, putting them up for adoption. Americans would wander down the street to buy Mexican serapes or sombreros and wind up leaving with mutts.

The Fieldings got permits. They built a shanty amid the souvenir shops. They started taking in donations, as well as dogs. "We just sort of extended our vacation," Terri says.

They've been here nearly two years. Red recalls that he had never been south of the border and was nervous about the trip. "I didn't really want to come to Mexico," he says. "But we fell in love with this place. And I found out I've been a Mexican my whole life."

In the late afternoon, 9-year-old Katie Burton and her sister, Brianna, 12, of Laveen, build sand castles on the beach as a half-dozen Mexican men unravel a huge net to catch fish from the shore.

Two of the men grab lines and splash into the sea while others untangle netting, joking and yelling at one another. They are silhouetted in the sunset as the girls join their parents at a campfire beside the family's RV.

There is still no sound of gunfire in Rocky Point, just waves splashing and the fishermen's laughter.