Rocky Point is Safe! Just in time for a Memorial Day Vacation

I thought since some of you might be considering Rocky Point for the Memorial Day holiday, I would share my experience from a few weeks ago when I visited Rocky Point.

I post Mexico articles to the Mexpro.com blog and Facebook pages every week. And therefore, I read all the news about Mexico. So I can’t deny that I considered all the “drug war warnings” when I decided to take a vacation to Rocky Point a few weeks ago.

I had been working really hard on Mexpro.com’s sister company’s new website and was due for a vacation. Rocky Point is close by (only a 6 hour drive from Flagstaff, AZ) and sits at the north end of the Sea of Cortez. It’s amazing the ocean is such a short distance from the dry desert of Arizona.

The first time I ever went to Rocky Point we stayed on Sandy Beach in a tiny trailer that sat almost in the water at high tide. I was about nine years old. I remember the seafood was good and the beach was empty and I had more fun than I could imagine. Even now it’s been over 20 years since I was in Rocky Point, the last time being in my early college years.

When I began to look for a hotel I realized there were now many high-rise hotels in Rocky Point, as well as all types of boat tours, restaurants and sight-seeing adventures – mostly run by Americans. We made our reservations at Penasco del Sol, because they allowed dogs, were located in the center of town and were rated #1 on Trip Advisor. 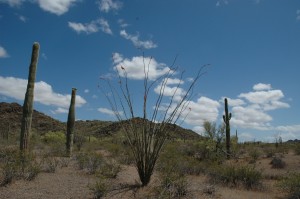 We arrived in Mexico on a Sunday. Nothing stopped us from getting in – American border patrol barely looked at us, and the Mexicans sent us on through. The line to get back into the states was fairly long, but didn’t seem too crazy for a Sunday afternoon. Nevertheless we were happy to be heading south.

The drive from Flagstaff to Rocky Point is extraordinary. You begin in pine trees at 8000 feet; you slightly descend to juniper and bright red rock, then to rugged desert and giant saguaros. Then around Ajo you start to see even more Saguaros, but you also see the famed organ pipe cactus and many, many ocotillo (one of my favorites), which were in bloom. You will see more organ pipe cacti in Mexico. They are more plentiful and larger than what you see in the states (at least from the highway). You then will hit more mountains and then down to the sandy desert and the beach. It’s quite an amazing summit to sea driving adventure. 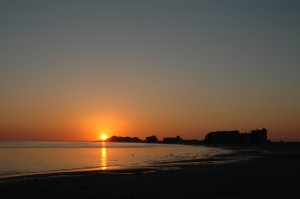 At our hotel I was followed into the restroom by a worker, when I chose to use the public restrooms before registering. We took the dogs up to our room where we could view Sandy beach in its entirety. The sun was just beginning to set, so we put on a suit and headed for the beach. We walked three-quarters of the way to Cholla bay before we turned around.

The dogs were feeling their way around the waves, trying to jump over them, go through them, running past them. There were millions of interesting shells, and as the tide kept going down, tidal pools appeared in some flat rocky sections that began to appear on the beach. We wove through the rocks looking for interesting creatures and shells. We saw a baby flounder in the sand while we were wading.

We got back to the room tired and hungry. We walked across the street to Filibertos. There was a place called Max’s Cafe just a few doors down and it looked like a great place to get American food –it had that vibe, but we were looking for something more authentic. So, for $11 we each ate two large fish tacos with the best salsa we had our entire trip (and all the salsa was way better than average)--oh and that included the beer. 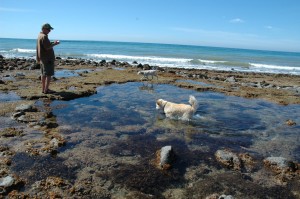 Our days in Rock Point were filled with beach combing every morning and every evening at sunset. We had a delicious breakfast of chilaquiles at Manny’s Beach Club one morning before heading to the large tidal pools there for discovery.

The beaches were mostly bare, with only a handful of people each day. The jacuzzi at Penasco del Sol was only busy in the evening and even some evenings we had it to ourselves.
Nobody reprimanded us about our dogs. We could take them most places with little trouble.

One morning when we awoke there was a large canister on the beach—like maybe 100-200 pounds. We didn’t think much of it—probably something from a fishing vessel--but soon watched as the local military or police force went to check it out and then had it hauled away.

Several days while we were there locals were out cleaning the beach.

I guess the Sonoran travel warnings were good for one thing – making my vacation quiet. But really, I have no idea what they are talking about. When we first drove into town we saw guys in military looking outfits carrying guns in a humvee. That’s not abnormal – even before the drug wars--I have often seen that during travels to Mexico.

When I talked to Rosie Glover of the Visitor Assistance tourism program about the safety, she mentioned that the police force was completely revamped recently. All the “crooked” officers were fired and a new standard was set in the city. Those who are looking for a mordida have been canned, as well. 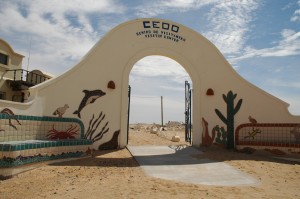 My husband and I went to CEDO and explored around Cortez, Cholla Bay and Sandy Beach. We never felt in danger or disturbed. We were treated like guests everywhere we went.

I am glad to know Rocky Point is still the same as I remembered—besides the high rise hotels. I will go back again soon. It was one of the most relaxing vacations I’ve had, the sites were gorgeous, the food was delicious and the people were a joy, as always.