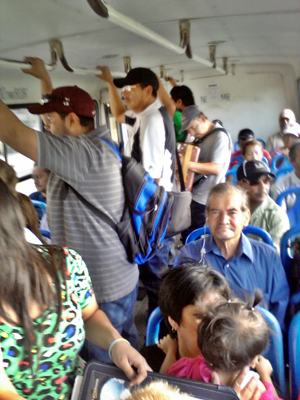 I’ve never been an expert in getting around in “the big city”. I’m a small town kid, and I’ve had my own car since I was a learner’s-permit-brandishing 15-year-old. My first was a 150-dollar, light-blue/rusted four-cylinder 1985 Mustang. I had earned the money busing tables at a Mexican restaurant called El Sarape. Oddly enough, I now live in the part of Mexico where the Sarape originates. That car had more get-up-and-go than any vehicle I’ve owned or operated since.

However, that car was a piece of junk. I believe the technical term is lemon, even while I thought it was cherry. It was a rough teacher, with a clutch that had to be muscled into first. As I warmed it up before school during the cold winter mornings, I had to sit in the car and nurse the accelerator lest it turn off by itself, since the idle setting was adjusted to “death-mode.”

That car didn’t last long. I got my 150-bucks-worth out of it. The clutch eventually got stuck indefinitely in second gear (probably the best gear to use if you only had one to choose from). However, as a lad in a small town I could rely on my friends to pick me up and drop me off, and a bicycle when the weather was fair or the big-yellow school-bus for official transportation. As a final resort I used the public transit system, which was free in my hamlet of Shelton, Washington. There were no taxis in my town while I was growing up.

In a bigger city, and in other countries, things operate differently. In my last article I talked about how to deal with your vehicle when it fails when you’re in the middle of a city in Mexico: how to get it out of harm’s way, to a reliable mechanic who could see it back onto its four radial feet.

Now, where do we go from here; most auto shops don’t have a spare room and stocked fridge for you while their attempting to resuscitate your motor carriage. Besides, who wants to sit around in the same place while exploring a strange land?

Cities in Mexico are very dense. You can take a look at Google’s street view to notice the difference.

In the commercial parts of Saltillo, you will see buses and taxis driving haphazardly, watch out and look both ways before crossing a street. If you want to get a ride on one of them, it’s a simple flagging-down procedure. Raise a hand and make eye-contact with the driver. Both cabbies (known in Mexico as taxistas) and bus drivers (camioneros) are financially motivated to get more fares. They are also motivated to get places quickly, to keep schedules.

I’ve never been much of a bus expert, but I know you will want to find a map and figure out which route gets you to the area you want. The bus (or camion, or autobus) is a very economical way of getting around. Nine pesos will get on you onto most routes in Saltillo, that’s less than a buck.

I would imagine that most folks on vacation can afford a taxi in Mexico; however, the bus is a good time. The drivers are in a hurry, they have to take money and give change while operating their motor beast. Most cities in Mexico use speed bumps (or bordos/topes) to control traffic speed. A high riding bus can just zoom right over them, which transfers into a cheap roller-coaster ride for the passenger. Quite often musicians will get on board; in the north of Mexico it’s often an accordionist/singer. The music mixes with the roller-coastery experience to make it feel a bit like a carnival, which is one of my favorite events in Mexico.

If you’re just looking to get to a destination in a hurry, taxis are very affordable in Mexico. Quite often the poor use them since the price of maintaining a car is below the means of the working classes. Oddly enough, the taxi fare goes down when you are in a bigger city. In nearby Monterrey (where the taxis are painted green) 20 pesos starts the meter, and you pay five pesos for each kilometer. Not Bad. These rates vary from city to city, as do the color of the taxis.

If you want to get behind the wheel you can rent a car. In a city like Monterrey, you can expect to pay as high as 1,000 pesos/day, which translates to over 80 bucks American, at a 1-3 day rate. The price scales down to bulk rates for a longer rental period. In tourist destinations you can expect to pay much more for car rentals.

My advice: ride the bus, keep your valuables in your front pockets and enjoy the ride.