Politics and Voting in Mexico

Getting away from politics can be its own kind of vacation. I’ve been told that in US, elections and political themes take up much more time than they do in many other countries. I’m not saying that I dislike politics. I served in the Iraq war and I have a degree in political science, and talking politics is a guilty pleasure of mine.

I say guilty pleasure because I think that politics can be an addiction, clearly demonstrated in the 1994 book by the late Hunter S. Thompson Better Than Sex: Confessions of a Political Junkie. From my experience in Mexico, people are less prone to use addictive drugs for recreational use, and they are less prone to addictive behavior in comparison to the US population. I’m not saying that the US is without its merits, but Mexico is culturally longer lived than the US. Mexico knew a time before the railroads, the modern age of chemistry and all the other wonders that made the United States what it is today.

Political views take a much lesser role in relationships in Mexico than they do in the US. I read that many North Americans refuse to even date someone who has differing political views, particularly a person who is a member of an opposing political party, i.e. democrats and republicans. Mexico doesn’t have either of those parties. Mexico has a long list of parties. I didn’t realize how different my wife’s political views were from my own until long after we were engaged. But it doesn’t really matter because we don’t really bother to talk about politics much. Well, she doesn’t. I am, after all, an American through and through, a poli-sci major and a war veteran, so I will probably always have strong political opinions.

Although Mexico does put less emphasis on its democratic process, it does exist. Many people criticize the system, saying that it is corrupt. Before the 2013 Mexico elections this year, many groups campaigned to put a pet cat or farm animal in office rather than elect a human politician. 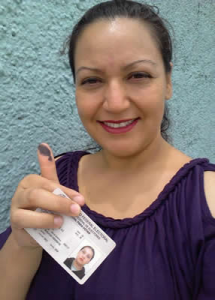 “Morris, the cat whose underground political candidacy won him headlines around the world, lapped up 12,000 votes in the election for mayor of Xalapa, Mexico, his handlers claimed on Monday,” which is what abcnews.go.com posted recently as the count is finishing up south of the border for the July elections.

Mexico’s political system is far from perfect. I think the US government is more effective at taxing the population and using the tax dollars to affect the world on a global scale, which is noticeable to most any person who consumes world news. However, not everyone wants to live in an advanced political system like the US. I’ve read from other expats that their main reason for moving to Mexico was to escape the “Mommy Government” of their home country, whether it’s Canada or the UK. Mexico’s government has a much lesser presence in the people’s daily lives.

However, people do still take part in the political process in Mexico and consider voting a civic responsibility. Voters even have to get their thumb dyed to show that they have voted. I suppose like many other things in Mexico, voting is more of a tradition than something you do because you hope to see change.