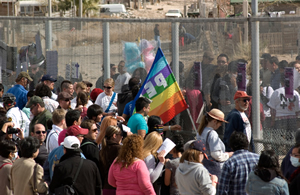 February 17, 2016 In his final Mass in Mexico, Pope Francis stood on a platform above a crowd of 250,000, looking across the border from Mexico to the U.S. Pleading for a different view of migrants he stated, "Let us together ask God for the gift of conversion." In his message, directing prayers for those... Read More »

Napolitano - the Border has Never Been Stronger

Homeland Security Secretary, Janet Napolitano, while testifying before the Senate Judiciary Committee exclaimed that the border has "never been stronger"... Read More »

Fact or fiction? The Myths and Realities of Illegal Immigration

With immigration reform on the horizon, the Deseret News set out to see if we could confirm or debunk what's being said... Read More »