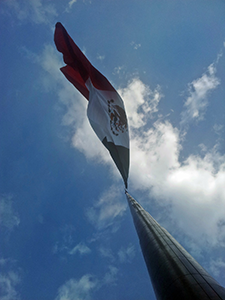 I’ve just concluded my month-long vacation with my family and old friends in Washington State where I grew up, in the US of A. I’ve been back in Mexico for only 24 hours, and I’m already feeling what I missed. To be honest, I was pretty homesick for my life in Mexico, and I think that maybe for my next US trip, I’ll stay under 20 days.

To me, the definition of “expat” is almost opposite to that of an immigrant who moves to find better paying work. I don’t know any ex-patriots who moved permanently to the tropics because the pay is so much better. We go south for a better life, not for better stuff.

I’m lucky enough to have a US military veteran’s compensation that allows me to live in Mexico without the necessity of working for a living like most people. The work I do is for fun, not because I need it to pay the rent. I’m certain that if chose to expatriate to a different country with a higher GDP, such as Sweden or Japan, I would certainly have to work full-time in order to eat and pay the bills.

For people such as myself, who have a fixed income (usually retirees), Mexico offers more opportunities for a life of leisure. For some examples, there’s the weather. The sun shines much more where I am than it does in Washington. That’s great for sun-worshippers but you can always go to Arizona or southern California for that.

Another thing to consider is the basic price of leisurely activities. On my first night back in Mexico I took my wife to see a movie; and we paid less than half price for our tickets and about a third the price for popcorn and soft drinks as I would in the US.

Because of the price of going out on the town (bowling, golf, eating out, go-carts, visiting the carnival, etc.) is so much more expensive for me in the US, I ended up just staying inside and playing video games with my friends. Electronics in Mexico are more expensive than they are in the US to contrast. That basically means a more sedentary life-style, which can lead to health problems.

Then there’s the food. If it’s 3 a.m. and maybe you’ve been up late visiting with some old friends and you want to get some food to soak up all the booze, there aren’t quite as many options for me up in the US. A few fast-food places stay open and maybe some 24-hour cafés. In Mexico there are fresh hamburgers and tacos right on the street that have fresh ingredients and are free of most chemical preservatives. And it’s much cheaper to boot. During the month I went back to Washington I gained 10 pounds, probably from being sedentary and eating too much cheap American fast food.

But the main reason that I stay in Mexico is for the people. You can notice this immediately when you go through US customs and then Mexican customs. The US has more enemies than Mexico so the Mexican immigration officials aren’t trained to be as circumspect. After all, tourism is one of Mexico’s major industries; it is the 8th most visited country in the world.

While Americans are often more polite in the etiquette, (a vestigial train from our British roots), Mexicans are sincerely kind and helpful. For example, the drivers in Mexico ride around more often with their windows down so they can communicate with other motorists, even though air-conditioning is supposed to be more fuel efficient. And I very rarely hear people say “bless you” after a sneeze in the US. In Mexico a complete stranger will say “salud” after hearing a sneeze. Maybe it’s partly out of superstition and tradition, but it’s just sincerely kind.

There’s also the conversation. The things people talk about in my experience differ greatly. Yes there’s quite a bit of violence in Mexico. That seems to be more of a concern to the folks in the US. The talk of the drug cartels is kept to a minimum in most circles I know in Mexico. In Mexico the conversation is kept more local to the people you know, less about politics and topics that are more depressing. But then again Mexico has a lesser role in world events, and I’m fine with that.

Yes, there’s much more crime and violence here, poverty is more prevalent in Mexico, but yet people go on with their lives. Families are closer and people adhere to old traditions that have given them pride and purpose for centuries.

While it was great to spend time in my ancestral home country, to see my mother, to spend time with my old friends, I spent part of everyday missing my life down in Mexico.