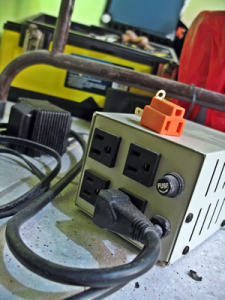 For anyone who has spent some time in a Mexican city: you may have noticed a building with the big letters CFE. It’s known as the Comisión Federal de Electricidad. Along with Mexico’s petroleum industry, it’s nationalized. This gives Mexico a very different dynamic than the US. The CFE bills households once every two months, and they let you know how much of the power production is subsidized. Along with water usage, the higher the volume of light you consume, the subsidy percentage changes. It’s kind of like tax-brackets in the US. If you begin to make more money at your job, you have to pay a much higher percentage to internal revenues.

I’m not a member of any socialist party, or affiliated with any political party for that matter, but I was pleasantly surprised to see this system, since it behooves Mexican consumers to go green. There’s much more of the “reduce, reuse, and recycle” motif going on here, since it’s been structured around economic incentives. I had to quickly learn from my host families (i.e. my step-brother’s mom, my in laws, and my wife) that I need to turn off lights as I exit rooms, shut down my computer if I step away for any small amount of time, and air-conditioning is a rare luxury. When I plan on going to an air-conditioned complex I try to remember and bring a sweater, as I’ve become acclimated to Mexico’s natural warmth.

While I’m happy to speak volumes of praise about the greatness of Mexico, it’s not without its downfalls. As a child of Generation Y, I was growing up as the internet was making its way slowly into homes in the US. Now 30 years old, I still put great value into having a top-of-the-line desktop computer, even though many people speculate the practicality of the desktop computer is waning. However, most electronics in Mexico have a higher markup from import tariffs, and most online stores that vend electronics don’t ship to Mexico.

That being said, electronics are more valued in Mexico, but they are also put at greater risk. I’d venture that the danger has to do with the loose regulations on electricity. While the standard 120V/60Hz of the US is also the norm for Mexico’s grid, many Mexican houses have yet to be retrofitted with ground wiring. That’s the third circular prong that dumps the excess energy to the safety of our mother earth.

I’ve lived in several homes in Mexico that haven’t been ground wired, and you need to take special precautions to protect not only your electronics, but yourself from the excess juice.

During the winter, I had an electric space-heater that had a ground prong, but the wall socket was not fitted with a ground hole. This is usually remedied with a cheap converter that allows you to plug a three-prong device into a two-prong socket; this doesn’t make it grounded, or any safer. During the middle of a particularly cool desert night, the excess voltage melted the wall-socket casing, as well as the heater’s plug.

Luckily, I was able to get the space-heater’s power cable replaced for under 10 dollars. To prevent disasters like that, it’s important to hook things up to a voltage regulator. They differ from surge protectors that we use for computers in the US (surge protectors cut power in case of an over-influx of voltage, but only protect for one surge: like a fuse).

Voltage regulators on the other hand aren’t as common a site in North American homes. They are complex circuits that continually monitor voltage and use conduction through a shunt to deliver either more or less voltage to maintain an exact level. This is very important for expensive things like computers, new television sets, home gaming systems, etc. My wife even has one for her refrigerator and microwave oven. 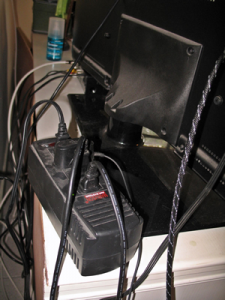 My main computer (which I use for everything from PC gaming, to watching Netflix, to blog writing) is retail-valued at over $1,500 USD, and the data on the hard-drives is priceless. For me, it’s a no-brainer to put down 400 pesos to protect it from the irregular power fluxes we experience on the Mexican electrical grid. The 30-dollar (US) range is the starting price.

If your Mexican home is prone to power failures, and you don’t want to lose the data on your hard-drive, it may be worth it to buy a regulator that has a battery backup to give you a buffer of time to safely shut down. That sort of electrical insurance device will cost about $300 USD, and may be worth checking into for folks running web servers down in old Mexico.

As a rule of thumb, always insure your data by backing up on multiple hard-drives and devices. And when it comes to other types of hazards, be sure to buy specialized insurance policies before crossing down Mexico way.