The Mordida - The Mexican Bribe 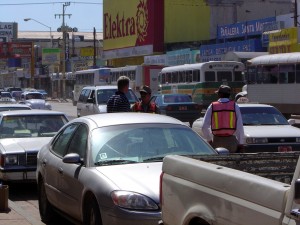 In Mexico there is an unfortunate situation known as the Mordida or bite in English.

An officer might threaten a traffic offender with a long trip to the police station, time spent in front of a judge or even vehicle impoundment. The mordida is a pay-off to the Mexican police officer for a traffic offense, in an attempt to avoid these "un-necessary" delays.

Mordida payments can range from 50 to 1500 pesos. Note that the fee is negotiable, but not with harsh or disrespectful words. Stand your ground, but be considerate, calm and polite. Upsetting behaviors will only work against you in Mexico.

To avoid paying more money, try to keep your cash in a different place than where you keep your license. If the police officer sees a lot of money in your wallet they may request more.

Some travelers have experienced crooked police officers who have taken their wallets completely. To avoid this, one can make a laminated copy of your driver's license and keep a "fake" wallet with a few expired credit cards and a small amount of cash. Maybe just have a 50 peso and two 100 peso bills; if American money, have a five and two ten dollar bills.

If the officer asks if the "fake" license is the original, it is best to tell the truth and say it is not. Lying to Mexican police officers is not recommended.

Some of the things you can do to avoid a Mordida include the following:

The goal of the police officer dishing out the mordida is the get an uniformed, fearful foreigner willing to pay the fee to avoid any trouble. If you appear to know what's going on, and are respectful, chances are you will not have to pay.

The Mordida is less threatening than it may originally appear. We hope you don't have to deal with the Mordida, but if you do these tips should help you.