Dia De Los Muertos: A celebration for the living and the dead 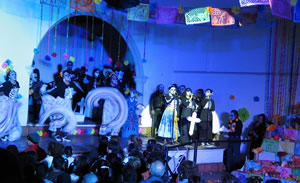 I returned from my Puebla vacation on Halloween day, a bit melancholy I wouldn’t be attending any costume parties or taking part in any trick-or-treating traditions. However, this holiday which is wholly considered as an American tradition is gaining popularity in Mexico. Though much of the Catholic Church here considers its celebration sacrilegious, that doesn’t stop college kids from throwing costume affairs, or little kids going up to random strangers dressed up as demons and vampires, asking for candy.

However, the pagan American tradition on the 31st pale in comparison to those of Dia Del Los Muertos, or the Day of the Dead. Many people are confused when I tell them that in the US nothing closes for Halloween. In Mexico, students come home for the holiday and businesses close. Here in Saltillo, the boulevard of Francisco Madero is blocked off by municipal police and vendors crowd together creating a one-day market place. Why this particular boulevard? It’s adjacent to the 112-year-old Pantheon Santiago cemetery.

Much of the vendors wares aren’t out of the ordinary; pig skins, candy; tortas for 10 pesos: not a bad deal. But what’s most impressive are the floral arrangements. Crossing through the cemetery gates is a cluster of foot traffic reminiscent of a pro sports game. Then one can see what the reason is for all the flowers. 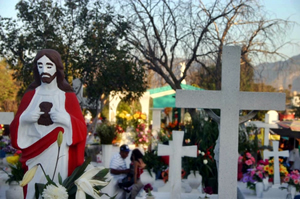 Family tombs and graves stand side by side with little room in between. It’s no lawn decorated by headstones like those in most US graveyards, unless you’re from New Orleans. That’s what an American tourist would think when they see this cemetery; it’s reminiscent of the scene in Easy Rider when the characters are in The Big Easy during Marti Gras, and hiding out in a cemetery. Perhaps the main difference is that the names on the tombs here are in Spanish rather than French.

The roots of this holiday lay in a 3,000-year-old Aztec tradition of honoring the dead. The Aztec origins explain why this holy day is most popular in Mexico. While the ancients used the skulls of dead enemies for decoration, here in modern Mexico a sugar-skull does well enough.

While most families clean graves and leave flowers (sometimes putting down a couple square yards of grass on top of the otherwise dusty terrain), some observers go so far as to re-paint the graves with pastel colors. Traditionally family members would leave offerings of food and other effects that their passed loved ones enjoyed during life, but modern secularism seems to focus more on the enjoyment of the living. I did see one grave with two opened beers on either side. 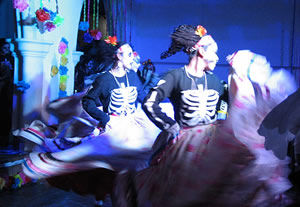 After dark, people for the most part leave the graveyards where they mourn. In downtown Saltillo at the public arts center I had the opportunity to see some traditional dance and music. Singers and dancers painted so as to look like living skeletons; they gave a less solemn and more joyous celebration of the dead.

On the 2nd of November in any town or city in Mexico, take a visit to the downtown and/or a cemetery and you’re guaranteed to see a celebration unlike anything north of the border. Just be respectful; don’t dress up like Darth Vader or a vampire. This day is for remembering the dead mainly, it’s not about scary witches or zombies.