El Espinazo del Diablo isn’t very well-known in North America. You may have heard of the Guillermo Del Toro film “The Devil’s Backbone,” which earns a 7.4 rating at www.IMDB.com. It’s even a Mexican film, but it has naught to do with Mexico: it takes place during the Spanish Civil War in 1939.

For anyone who’s driven to Mazatlan from the East, El Espinazo del Diablo is the name of an infamous path, (officially Route 40) that rides along a collection of peaks in the Sierra Madre Occidental Mountains. The Mexican people have long observed that the peaks resemble a gargantuan spinal column. For hundreds of years the route has been treacherous, and fueled folk-tales of bad spirits haunting the road. Mestizo folklore claims that the Archangel, Saint Michael (or San Miguel), fought a colossal demon in these mountains, and the peaks are the crooked, skeletal column remains of the fallen fiend.

According to www.dangerousroads.org “El Espinazo del Diablo or The Devil’s Backbone is the mountain pass in Durango, Mexico. It's about a five-hour long drive, and it was the only road from Durango to Mazatlan, Sinaloa, for a long time.” 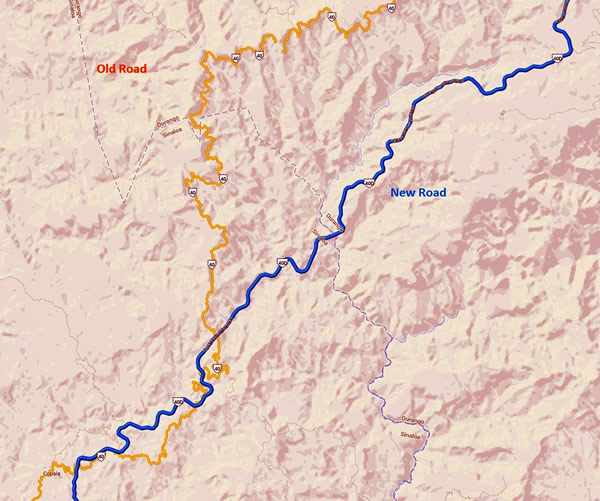 Last month I was on a road trip with my wife and an old buddy of mine with whom I served in Baghdad, while we were both in the Army. We had all been on dangerous roads before. I knew about the Devil’s Backbone highway. My step-dad had driven it before with my mother on a trip to Mazatlan in the late ‘90s. My half-sister was along for the ride: at the time she was five years old. The constant winding of the road made her lose her lunch. It is five hours of two skinny lanes, and 30 MPH is as fast as you can/should go.

There aren’t any guard-rails either. I was warned by cousins and other family with tales that this road meant constant vigilance and anxiety for the driver and motion sickness for the passengers. My in-laws warned with statistics and stories of those who drove too close to the edge: with no guard rails, slipping down mountain side is a very constant threat. My wife’s mother said that the mountains are so steep and remote that the victims of The Devil’s Backbone are rarely recovered by search and rescue teams.

I wanted to see it for myself. My wife was at the wheel. We had been told there was a new road: an alternate to the infamous and ancient route. The new toll way (officially called Route 40D), we were told, has bridges and tunnels instead of constant curves and sheer-cliff faces.

I was the navigator. We were at the point in Sinaloa, east of Mazatlan, where The Devil’s Backbone began. There was a vague entrance to the new toll way. We went left when we should have gone right. Minutes later we were all feeling the aforementioned motion sickness. Anxiety and fear filled the car as we stared down the steep cliffs of the Sierra Madre Occidentals.

After some time, we had all had our fill. We came to feel the curse of the road for ourselves. The route was taking its toll on all of us. I at least had GPS at my disposal. I anticipated entry points onto the new fee road.

As I looked at the two-dimensional map, I expected we could enter the safer, new highway at several points. But there was no junction; instead I looked up and saw a bridge: part of the new route. Other times when the GPS said we were right on top of the toll road, it wasn’t lying: the other path was a tunnel inside of the mountain: the same mountain which we were staring at. 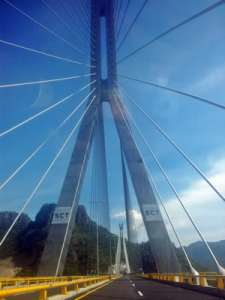 We did finally make it to a junction from 40 to 40D. There was an on-ramp at a small Sinaloa pueblo. After several hours of fear and motion sickness on El Espinazo we were relieved to be on a modern highway.

Not only is 40D faster and safer, it offers spectacular views from its modernly engineered bridges that span across the great valleys of the diabolic spine. When we drove by the toll booths, we weren’t charged a single peso, as the road was still being finalized, and pay-points had yet to be put in place.

On one great bridge toward the end of the drive in Durango, cars were lined up alongside the road. I thought perhaps something was wrong: nope. It was only a gaggle of motorists stopping to take photos of the grand vista of the Sierra Madres.

If you need to drive from the east to make it to Mazatlan, fear not. Mexico’s government has saved the day for motorists wishing to traverse the great continental divide of its Occidental mountain range, making it multitudes safer to cross into the paradise of Mexico’s Pacific coast.