Why Choose Sonora for Spring Break? 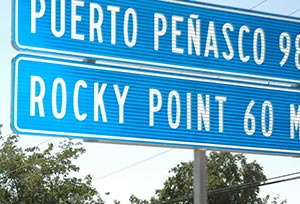 Spring Break is coming up in a few months, so if you're the planner-type, now is the time to start thinking about where to go. There are many beach towns in Sonora that are popular among for Spring Breaking, like San Carlos, Puerto Lobos, Kino Bay and Puerto Libertad. Yet, a large majority of folks... Read More »

Where to cross the Arizona/Mexico Border

Rocky Point or Puerto Peñasco is a beautiful city along Mexico’s coast. Find out the best things to do with your family on your next vacation there... Read More »

Border Security is a Hot Market for Technological Firms in Southern AZ due, in part to the close proximity to the U.S./Mexico border and the University of Arizona... Read More »

Fact or fiction? The Myths and Realities of Illegal Immigration

With immigration reform on the horizon, the Deseret News set out to see if we could confirm or debunk what's being said... Read More »

by CBS News (CBS) Agree with it or loathe it, everyone seems to have a strong opinion about Arizona's immigration legislation. "It's stupid," said Sheriff Clarence Dupnik of Pima County, Arizona. "And it's racist." San Francisco's mayor just banned official travel to Arizona. City councils in Washington D.C. and Los Angeles are considering similar measures,... Read More »